Unai Emery praised Arsenal’s “amazing” team spirit but admits his side have to improve defensively after twice coming from behind to beat Aston Villa in a pulsating encounter at Emirates Stadium. Pierre-Emerick Aubameyang’s stunning free-kick with six minutes remaining completed an unlikely turnaround for the Gunners, who had Ainsley Maitland-Niles sent off in the first half and were still trailing going into the final 10 minutes. John McGinn flicked home Anwar El Ghazi’s cross to put Villa ahead in the first half before Maitland-Niles was shown a second yellow card for a rash challenge on Neil Taylor four minutes before the break. Arsenal levelled early in the second period thanks to Nicolas Pepe’s first goal for the club from the penalty spot only for Wesley to restore Villa’s lead from Jack Grealish’s low cross less than two minutes later.

But in a thrilling conclusion, substitute Calum Chambers’ close-range finish brought the Gunners level on 81 minutes before Aubameyang’s late strike secured their third Premier League win of the season to lift Emery’s side back into the top four. The result was harsh on Villa, who impressed for long periods but paid the price for dropping far too deep in the closing stages and inviting Arsenal pressure. A fourth defeat from six league games means they remain in the bottom three. After opting for a mix of youth and experience for Thursday’s Europa League win at Eintracht Frankfurt, Emery recalled the bulk of his senior stars for the meeting with Villa. That meant the Spaniard went with the same back four that lost a two-goal lead at Watford last weekend, and another shaky performance here means they have still not kept a clean sheet in the league since the opening day of the season, conceding 10 goals in five games.

The defensive problems ultimately did not cost them the result against Villa, but Emery cannot rely on his attacking players to bail out his team all the time if they are to make a sustained challenge for the top four. A lack of urgency and desire to close the Villa players down led to the opening goal, with El Ghazi given plenty of time to cross for McGinn, who found himself completely unmarked after ghosting ahead of Matteo Guendouzi. Guendouzi summed up Arsenal’s performance, he was often sloppy in possession and his failure to track McGinn led to the first goal, but he led by example in the closing stages with a series of driving runs into the penalty area.

One of those runs resulted in a sloppy tackle from Bjorn Engels, allowing Pepe to equalise from the spot early in the second half. After Arsenal went behind again Guendouzi drew a fine save from Tom Heaton, who pushed his low drive from the edge of the box on to the post. With Villa seemingly unable to get out of their final third, Arsenal’s pressure finally told. A mistake by Tyone Mings allowed Chambers, brought on in response to Maitland-Niles’ dismissal, to stab a looping effort beyond Heaton. Then, after Aubameyang was brought down just outside the area, the Gabon striker curled beyond an unmoved Heaton to send the Emirates crowd, who were frustrated for much of the afternoon, into raptures. 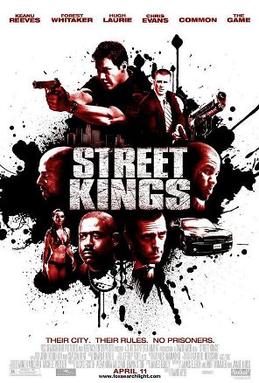 Keanu plays tough LAPD Vice & undercover cop Tom Ludlow who is a disillusioned man after the death of his wife and is constantly drunk on duty. he meets in a parking lot with Korean gangsters who are looking to buy a machine gun from him and who he also believes have kidnapped two Korean schoolgirls. After a vicious beatdown, the Koreans steal his car. This was planned, however, and he has the cops locate the vehicle via GPS. Upon arrival at their hideout, Ludlow storms in and kills the four gangsters inside, then locates the missing children after the shootout and altering the crime scene such that he killed the gangsters by returning fire. While the other officers in his unit congratulate him, he is confronted by his former partner, Detective Terrence Washington, who no longer approves of the corruption as well as the deception and has gone straight, reporting the problems to Captain James Biggs, of Internal Affairs, who apparently starts an investigation against Ludlow.

Believing that Washington was “snitching” on him, Ludlow follows him to a convenience store to beat him up. However, Washington is executed in the store in an apparent gangland hit albeit with heavy fire by two gangbangers under the pretense of a robbery. Though Ludlow is innocent and the two were working together to fight back, the surveillance video of the shootout shows him to have accidentally shot Washington while trying to protect him with his .38 revolver, which can heavily implicate him in the murder. The DNA of two criminals known as Fremont and Coates is found at the scene, as well as a large amount of cash in Washington’s possession. It is assumed that Washington himself was corrupt, despite his seemingly changed attitude, and that he had been stealing drugs from the department’s evidence room and selling them to Fremont and Coates. Ludlow teams up with Detective Paul “Disco” Diskant, who has been assigned to the case to join him in his personal investigation.

After interrogating a Latino thug named Quicks, the two are led to drug addict/dealer named Winston “Scribble”, which eventually leads them to a house in the hills where they discover the bodies of the real Fremont and Coates buried in a shallow grave. The condition of the bodies makes it apparent that they were killed well before Washington’s murder. Ludlow and Disco, posing as dirty cops who are willing to take over Washington’s supposed activity of stealing and selling drugs, are able to set up a meeting through Winston with two criminals masquerading as Fremont (Cle Shaheed Sloan) and Coates (Common). Freemont and Coates then recognize Ludlow as the cop that was present at the convenience store robbery, prompting Ludlow to question who Freemont and Coates really are, and in turn Disco quickly states he recognizes the two, and he is shot and killed immediately, along with Winston.

Ludlow manages to kill both the men, who turn out to be former crooked cops and escapes to the apartment of his girlfriend Grace Garcia who confronts him. A news report reveals the killers were undercover LASD deputies (Wander later states that the two had been in deep cover for so long that they “lost their fucking minds” and had become corrupt cops). Shortly afterwards, Ludlow is subdued by Detective Cosmo Santos and Detective Dante Demille – two fellow officers from his unit. Talking Ludlow with them, the two admit that they planted Fremont and Coates’ DNA and the drugs at the scene of Washington’s murder. This causes Ludlow to learn that Washington was surrendering their captain, Jack Wander, up to Biggs, as they were the ones that were stealing drugs from the department’s evidence room. The two cops take Ludlow out to the house where the two bodies of the real Fremont and Coates were found earlier, for execution. However, Ludlow manages to kill both of them. He then heads to Washington’s house to take care of their supervisor, Sergeant Mike Clady, who was about to kill Washington’s widow. He captures Clady and places him in the trunk of his car.

Ludlow confronts Wander at his house and apprehends him after a brawl between them. He then discovers that Wander has incriminating evidence against almost the officers in the department, along with the judges, councilmen and politicians; Wander had been concealing his unit’s corruption to cover-up his crimes, and in the process has used the opportunity to become the department’s captain. Wander, asserting that he is Ludlow’s best-friend and mentor, attempts to buy off his silence by bribing him with a large amount of stolen money and incriminating documents – which Ludlo had uncovered from the wall moments ago. However, Ludlow refuses and executes Wander. Soon afterwards, Captain Biggs and Sergeant Green arrive at the scene. Biggs reveals to Ludlow that they used him to bring down Wander and get access to his files by opening his eyes to the real corruption going on within his unit. As he leaves, Biggs tells Ludlow that the department does need him.

Badass Keanu before John Wick was just as deadly with a gun. This is a tough violent movie to watch but entertaining enough to get through. Reeves is awesome in this movie as is Whitaker. 7.5 outta 10!