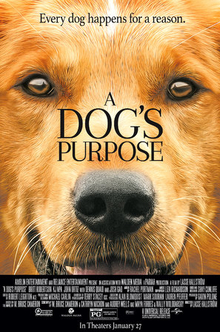 A Dog’s Purpose is a 2017 American comedy-drama adventure film directed by Lasse Hallström and written by W. Bruce Cameron, Cathryn Michon, Audrey Wells, Maya Forbes, and Wally Wolodarsky, based on the 2010 novel of the same name by W. Bruce Cameron. The film stars Britt Robertson, KJ Apa, Juliet Rylance, John Ortiz, Kirby Howell-Baptiste, Peggy Lipton (in her final film before her death in 2019), Dennis Quaid, and Josh Gad. The film, like the book, tells the story of a devoted dog who is looking for his rightful purpose and wants to fulfill it.

In the 1950s, a newborn feral beagle/German Shepherd/terrier mix puppy named Toby wonders what life’s true purpose is. Weeks later, while playing with his siblings, Toby is whisked away to the dog pound and is quickly euthanized, wondering if “fun” truly is life’s purpose. Toby’s spirit is reincarnated as a newborn Red Retriever puppy in 1961. Toby leaves his cage at a puppy mill and is found by two garbage men who plan to sell him. They leave to drink, and Toby is spotted locked inside their pick-up truck by a kindhearted mother and her eight-year-old son Ethan Montgomery, who rescue him from heatstroke. They bring Toby home and introduce him to Ethan’s father. After they convince Ethan’s father, the dog is allowed to stay and is renamed Bailey.

Bailey and Ethan bond quickly, especially over the summer when the family visits Ethan’s maternal grandparents’ farm, and Bailey now believes Ethan alone is his purpose. Years pass, and after several attempts at advancing in his job fail, Ethan’s father has become a deadbeat alcoholic. Ethan goes to a fair with Bailey and meets Hannah, whom he soon begins dating. Ethan and Hannah spend their summer together happily though their senior years are upcoming, but they plan to go to the same school; Ethan getting a football scholarship and Hannah following him on an academic one. When he goes home one night, Ethan’s father is drunk and shouting at Ethan’s mother. He turns on Ethan then and when his mother tries to keep them separated, he shoves her to the ground. Ethan orders his father to leave and never come back. Later, at a football game watched by scouts, Ethan is offered a full scholarship to Michigan State, but that night a vindictive classmate named Todd throws a lit firecracker into Ethan’s house, which results in a house fire. Bailey alerts Ethan, who goes to save his mother. Unable to get out of the door, they head out through his mother’s bedroom window upstairs.

Ethan first lowers her with her sheets to the neighbors below, then saves Bailey. However, he drops his rope and must jump, badly fracturing his leg and ending his athletic scholarship. Bailey attacks Todd, who is arrested by the police when firecrackers fall out of his pocket. Now, Ethan must go to an agricultural school where he will learn to take over his grandparents’ farm. Falling into depression, Ethan breaks off his romance with Hannah before leaving for college, while Bailey stays with Ethan’s grandparents. Shortly afterwards, Bailey becomes old and his health begins deteriorating. Ethan’s grandparents take Bailey to the veterinarian’s office, but Dr. Joyce is unable to save him, and Ethan comes into the office and watches as his beloved dog is put to sleep. The moment he passes away, Bailey reincarnates into another dog life, a female German Shepherd puppy, who grows into a police dog named Ellie, sometime in the late 1970s/early 1980s, while possessing full memories of her past lives.

Ellie is partnered with a widowed officer named Jakob of the Chicago Police Department and works hard at “seeking” and “finding”, now seeing the job as life’s purpose. The two form a close relationship which ends after Ellie saves a kidnapped girl from drowning and is then fatally shot by the kidnapper. Jakob breaks down in tears as his precious dog dies in his arms. Reincarnated again in the mid-1980s as a male Pembroke Welsh Corgi puppy, Bailey forms a bond with an Atlanta college student named Maya who names him Tino. Maya is lonely, and Tino makes it his purpose to find her some happiness. She starts a relationship with a classmate named Al whom she begins seeing after Tino falls for Al’s dog, a black and white female Landseer named Roxy. Maya and Al marry and have 3 children. In love with Roxy and now seeing her as his purpose, Tino is heartbroken when one day Roxy does not return from the vet. As a now elderly Tino dies, he thanks Maya for giving him one of his best lives.

Bailey passes away as Tino and reincarnates into his next dog life, this time as a St. Bernard/Australian Shepherd mix puppy sometime in the mid-to-late 2000s, and is taken in by an urban lady named Wendi, who names him Waffles. Unfortunately, Wendi’s neglectful husband Victor refuses to let her keep Waffles inside and, after several years dumps him in an abandoned lot. Afterwards, Waffles sets off in search of a new life. He gradually makes his way to the country area where he spent summers as Bailey and joyfully reunites with his old master Ethan, who is now in his 50s, living a lonely life at his grandparents’ old farm, which he now owns and runs. Not recognizing his dog, Ethan hands him over to the local animal shelter but has a change of heart and reclaims him, naming him Buddy. Buddy, sensing that he has finally found the true purpose of life, reunites Ethan with a widowed Hannah, and they get married.

Buddy convinces Ethan that he is his beloved childhood dog, by performing some tricks and responding to key phrases that were known only to the two of them many years back, such as “boss dog.” Ethan digs up Bailey’s collar, now old and rusty, and places it back on Bailey’s neck, and they resume playing exactly the way they did so long ago. Bailey narrates that life is about having fun, saving others, finding someone to be with, not getting upset over the past or the future, and living for today.

Feel good movie, a bit of a tear jerker, it has its fun moments amongst the more drama, romance and tender moments. Movies about the loving nature of dogs always gets to me and this one was no exception. I believe I had tears at more than a couple of scenes. I loved it. 8 outta 10!