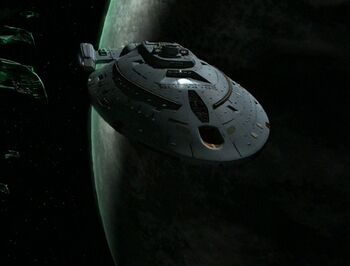 The USS Bellerophon (NCC-74705) was a 24th century Federation Intrepid-class starship operated by Starfleet. Under the command of Admiral William Ross, the Bellerophon transported Federation delegates to Romulus for a conference on Dominion War issues in 2375. (DS9: “Inter Arma Enim Silent Leges” ) The Bellerophon was the only Intrepid-class starship other than the USS Voyager ever seen in Star Trek, and the only one to appear outside of Star Trek: Voyager.

The Bellerophon sets were a reuse of the USS Voyager sets from Star Trek: Voyager. This resulted in the Bellerophon having a galley-style counter in the mess hall instead of the two food service replicators, seen in “Caretaker“, and captain’s dining room, mentioned in “Phage“. “Inter Arma Enim Silent Leges” writer Ronald D. Moore named the Bellerophon after the HMS Bellerophon, a British warship which served as part of a fleet commanded by Lord Nelson in the early 19th century. This vessel was in turn named after the Greek mythological hero Bellerophon, who rode the winged horse, Pegasus. Coincidentally, the USS Pegasus was featured in another episode written by Moore, namely TNG: “The Pegasus“.

The Bellerophon was also the name of the starship that colonized planet Altair IV in the film Forbidden Planet. That film was said to be among Gene Roddenberry’s inspirations for creating Star Trek. This was at least the second starship to bear the name, the first being the Nebula-class vessel USS Bellerophon seen in the Star Trek: Deep Space Nine pilot “Emissary“.