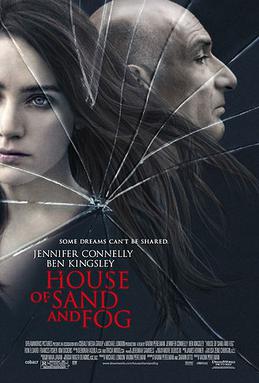 House of Sand and Fog is a 2003 American drama film directed by Vadim Perelman. The screenplay by Perelman and Shawn Lawrence Otto is based on the novel of the same name by Andre Dubus III. The story concerns the battle between a young woman and an immigrant Iranian family over the ownership of a house in Northern California, which ultimately leads to the destruction of four lives. The film was nominated for three Academy Awards: Best Actor (Ben Kingsley), Best Supporting Actress (Shohreh Aghdashloo), and Best Original Score (James Horner).

Abandoned by her husband, recovering drug addict Kathy Nicolo, living alone in a small house near the San Francisco Bay Area, ignores eviction notices erroneously sent to her for nonpayment of business taxes. Assuming the misunderstanding was cleared up, she is surprised when Sheriff’s Deputy Lester Burdon arrives to forcibly evict her. Telling Kathy that her home is to be auctioned off, Lester feels sympathy for her, helps her move out, and advises her to seek legal assistance to regain her house. Former Imperial Iranian Army colonel Massoud Amir Behrani, who fled his homeland with his family, now lives in the Bay Area working multiple menial jobs. Living beyond his means, he maintains the façade of a respectable businessman so as not to shame his wife Nadereh, son Esmail, and daughter Soraya. He buys Kathy’s house for a quarter of its actual value, intending to improve and sell it. Kathy is evicted from the motel she is staying in. With nowhere else to go, she spends the night in her car. Seeing the renovations and how the Behranis have settled in makes her determined to get her house back and she finds an attorney who assures her that because of the county’s mistake, they will return Massoud’s money and restore the house to her.

Massoud, having already spent money on improving the house, is unwilling to accept anything less than the higher value of the property, which the county refuses to pay. Kathy tries to convince Massoud to sell back the house but he angrily refuses. Desperate for help, Kathy stalks and seduces Lester into abandoning his wife and children and becoming her protector. Lester threatens to have Massoud deported if he refuses to sell the house back to the county. Massoud reports this to police and warns Kathy to leave his family alone. Kathy calls her brother Frank for help, but cannot bring herself to admit that she is homeless. Despondent, she becomes drunk and attempts suicide in the driveway with Lester’s sidearm. Massoud finds her drunkenly unable to discharge the gun, and brings her inside. Kathy tries to kill herself again with pills, but Nadereh saves her. As she and her husband carry Kathy to the bedroom, Lester breaks in, sees Kathy unconscious, and locks the Behranis in their own bathroom, refusing to let them out until Massoud agrees to relinquish the house. Massoud offers to sell the house and will give Kathy the money in exchange for her putting the house in his name. Lester takes Massoud to the county office to finalize the transaction.

Outside the office, Lester begins to manhandle Massoud and Esmail seizes Lester’s gun and aims it at him. Massoud draws the attention of police officers who misinterpret the situation and shoot Esmail instead of Lester. Massoud is arrested but is released after Lester confesses and is incarcerated. Massoud begs God to save his son but Esmail does not survive. Believing they have nothing left to live for, Massoud kills Nadereh by lacing her tea with pills. He then dons his old military uniform, tapes a plastic dust cover over his head, and asphyxiates himself while clutching his wife’s hand. Kathy discovers the couple and frantically attempts to resuscitate Massoud but she is too late. As the bodies of Massoud and Nadereh are taken away by paramedics, a policeman asks Kathy if the house is hers. After a long pause, she concedes that it is not.

Tragic story, beautifully portrayed by the talent heavy cast. What a display of the very best acting chops. 8.5 outta 10!