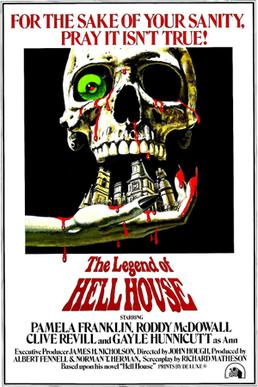 The Legend of Hell House is a 1973 British supernatural horror film directed by John Hough and based on the novel Hell House by Richard Matheson, who also wrote the screenplay. The film stars Pamela Franklin, Roddy McDowall, Clive Revill, and Gayle Hunnicutt as a group of researchers who spend a week in a purportedly haunted English mansion in which previous investigators were killed.

The physicist Dr. Lionel Barrett is enlisted by eccentric millionaire Mr. Deutsch to make an investigation into “survival after death” in “the one place where it has yet to be refuted”. This is Belasco House, the “Mount Everest of haunted houses”, originally owned by the notorious “Roaring Giant” Emeric Belasco, a six-foot-five perverted millionaire and supposed murderer, who disappeared soon after a massacre at his home. The house is believed to be haunted by numerous spirits, the victims of Belasco’s twisted and sadistic desires. Accompanying Barrett are his wife, Ann, as well as two mediums: mental medium and spiritualist minister Florence Tanner and physical medium Benjamin Franklin “Ben” Fischer, who is the only survivor of an investigation conducted 20 years before.

The group arrive to begin their investigation a week before Christmas Eve, and the rationalist Barrett is rudely skeptical of Florence’s belief in “surviving personalities”, spirits which haunt the physical world, and he asserts that there is nothing but unfocused electromagnetic energy in the house. Barrett brings a machine he has developed, which he believes will rid the house of this energy. Though not a physical medium, Florence begins to manifest physical phenomena inside the house. When, after a quarrel with Tanner, Barrett is attacked by invisible forces, he suspects that Florence may be using the house’s energy against him. Meanwhile, Fischer remains aloof, with his mind closed to the house’s influence, and is only there to collect the generous paycheck. Ann Barrett is subjected to erotic visions late at night, which seem linked to her lackluster sex life.

She goes downstairs and, in an apparent trance, disrobes and demands sex from Fischer. He strikes her, snapping her out of the trance, and she returns to herself, horrified and ashamed. A second incident occurs a day or so later; this time, she is awake but uninhibited due to alcohol. Her husband arrives a moment later to witness her advances to Fischer. He is resentful, and spurns Fischer’s warnings that the house is affecting Ann, claiming that “Mr. Deutsch is wasting one-third of his money!” Stricken by the accusation, Fischer drops his psychic shields, but he is immediately attacked. Florence is convinced that one of the “surviving personalities” is Daniel, Belasco’s tormented son, and she is determined to prove it at all costs. She finds a human skeleton chained behind a wall. Believing it to be Daniel, Florence and Fischer bury the body outside the house and Florence performs a funeral. Nevertheless, Daniel’s “personality” continues to haunt Florence; she is scratched violently by a possessed cat. Barrett suspects that Florence is mutilating herself. In an attempt to put Daniel to rest, Florence gives herself to the entity sexually, but the entity brutalizes her and possesses her body.

Barrett’s machine is assembled. Possessed by the malevolent spirit, Florence attempts to destroy it, thinking that it will harm the spirits in the house, but she is prevented from doing serious damage. She enters the chapel, “the unholy heart” of the house, in an attempt to warn the spirits, but she is crushed by a falling crucifix. As she dies, she leaves a symbol written in her own blood. Barrett activates his machine, which seems to be effective. Fischer wanders the house afterwards, attempting to sense psychic energy; in astonishment, he declares the place “completely clear!” But violent psychic activity soon resumes, and Barrett is killed. Fischer decides to confront the house, and Ann accompanies him despite her misgivings. Deciphering Florence’s dying clue, Fischer deduces that Belasco is the sole entity haunting the house, masquerading as many. He taunts Belasco, declaring him a “son of a whore”, and that he was no “roaring giant”, but instead more likely a “funny little dried-up bastard” who fooled everyone about his alleged height.

Even as objects begin to hurl themselves at Fischer, he continues to defy the entity, challenging, “What size WERE you? Five foot two? One? I know! I’ll bet you weren’t even five foot tall!” At that, all becomes still. Fischer then concentrates, and a stained-glass partition in the chapel shatters, revealing a hidden door. Fischer and Ann discover a lead-lined room, containing Belasco’s preserved body seated in a chair. Pulling out a pocket knife, Fischer rips open Belasco’s trouser leg, discovering his final secret: a pair of prosthetic legs. Fischer realises that Belasco had had his own stunted legs amputated, and that he had used the prosthetics with which they were replaced in a grotesque attempt to appear imposing. Belasco also had the specially built room lined with lead, presaging the discovery of the electromagnetic nature of life after death. With the room now open, Fischer activates Barrett’s machine a second time, and he and Ann leave the house, hoping that Barrett and Florence will guide Belasco to the afterlife without fear.

It’s a bit boring and dragging in places but I like the gothic atmosphere. The acting is ok in most places. I give it a 6.5 outta 10!