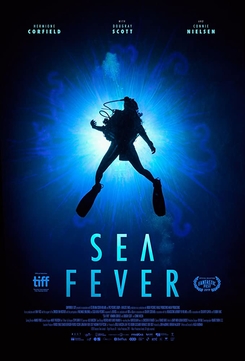 Sea Fever is a 2019 science fiction thriller film written and directed by Neasa Hardiman, starring Hermione Corfield, Dougray Scott and Connie Nielsen. The film follows the crew of a marooned fishing trawler, who find themselves threatened by a parasitic infection.

Siobhan, a scientist studying faunal behavioral patterns, purchases a place on the fishing trawler the Niamh Cinn Óir, manned by a crew of six: skipper Gerard, his wife Freya, ship’s engineer Omid, Johnny, Ciara, and Sudi. As they set off, they are warned by the Coast Guard that their planned destination, which is rich with fish, is in an exclusion zone. Gerard, unbeknownst to the others, takes them into the zone, because he needs a large haul of fish on this outing to keep the ship. As they travel through the zone, the ship runs into an unknown, shoal-like object which stops the boat. Omid discovers strange breaches in the hull which exude a blue-green slime. The crew suspects barnacles, and as Siobhan possesses the only diving gear onboard, Gerard sends her armed with a knife to cut the boat free. Underwater, she discovers the tentacles of an enormous bio-luminescent organism far below adhering to the boat.

Thinking it may be a newly-discovered form of giant squid, the crew attempt to capture it with their net, but the creature proves too heavy. While releasing the net, Johnny cuts his hand on the rope, which is covered in the same slime. The crew sees another ship on the horizon, and Gerard, Johnny, and Siobhan row to it to seek help. Once onboard they find the entire crew dead from suicide inside the cabin, with one of the men appearing to have had his eyes scooped out. Gerard instructs the others not to speak of this discovery, calling it “sea fever” and insisting the other crew merely went mad. Upon their return to their own ship, they discover that the creature has released them. Lowering their nets, they make large catch of fish, and the crew is in high spirits.

That night, Johnny begins to exhibit uncharacteristic behavior, including wanting to go for a swim. Suspecting a fever, Siobhan performs a medical diagnosis on him and discovers movement in his retinas. As he is washing his face, Johnny suddenly goes blind and his eyes burst, releasing minuscule organisms that slither down the drain and enter the ship’s water system. The crew rushes to save Sudi, who is taking a shower. Sudi suffers numerous cuts over his body as the waterborne creatures bite him, and Johnny dies from his injuries. Checking their water filtration system the crew find that their entire water supply has been contaminated by the small creatures, who Siobhan realizes are larvae of the larger creature. Gerard pilots the ship towards home as quickly as possible.

Disinfectant and UV light both fail to kill the larvae in the ship’s water. As a last ditch effort, Siobhan and Omid electrocute the trawler using the ship’s arc welder, apparently sterilizing the boat’s water supply and preventing further infection. However, Siobhan insists that when they arrive at port, they self-quarantine on the trawler for a further 36 hours before returning to shore: if any of them have already been infected, they risk introducing the infection to the public. When Sudi dies from the infection, and the crew refuses to quarantine, Siobhan disables the trawler by entangling the propeller.

The crew checks their eyes for the parasites. Siobhan, Omid, Freya, and Ciara show no signs of infection, but Gerard is clearly infected, and after a heartfelt goodbye Freya mercy kills him by slicing his throat. Ciara goes insane and attacks Siobhan, only to fall to her death. As Ciara dies, a parasite emerges from her eye, revealing her to have been infected. Now with only Freya, Siobhan, and Omid remaining, Freya decides to take the rowboat and try to make it to shore to double their chances of being found.

Siobhan and Omid discover that one of the larvae in the ship’s water tank survived and has become a larger creature, which eats through the ship’s hull to return to the ocean. The trawler begins to sink. Siobhan and Omid use alcohol to ignite a fire on the Niamh Cinn Óir and then abandon it on an inflatable boat. Omid, who cannot swim, falls overboard, and as he thrashes he is seized by the adult creature. Siobhan rescues him, but cuts her bare hand on the creature’s tendril, becoming infected. As a rescue helicopter, alerted by the fire, approaches, Siobhan dives into the water, swimming down towards the bioluminescent creature.