Sometimes I need to vent. Sometimes I need to shout it off and vent and walk (or stomp) around and let the pressure out of my system. And that’s because if I do not do that, I will bottle it up and it will burst at an awkward moment and that would not be a pretty sight.

Another way is to shut myself away from others. And just be quiet. Look at stuff, get some fresh air and not talk to anyone. Play some music and just let it play in the background and try not to think about anything else but let the lyrics and the music wash over me and concentrate just on that.

Watching a favourite movie or tv show helps. Again, the familiarity of the show/movie is really important. I may not even be concentrating on the movie that much but it helps to have it on and that I can see & hear it if I need to. 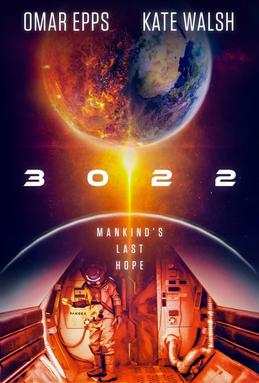 3022 is a 2019 science fiction film starring Omar Epps, Kate Walsh, Miranda Cosgrove and Angus Macfadyen. The film is set on a space station in the future. The crew suffers traumatic stress and considers abandoning their mission after they observe what they believe to be the destruction of Earth. The film is shown as a series of flashbacks and flash-forwards.

In 2190, the space station Pangea refuels ships bound for Earth’s first space colony, Europa One. Rotating crews from different countries maintain Pangea in 10-year shifts. Four American astronauts arrive to begin their term: Captain John Laine, engineer Jackie Miller, doctor Richard Valin, and Lisa Brown. In their first year, the crew interacts amicably, and Laine and Miller begin a romantic relationship. With each passing year, the crew drifts apart. By the fifth year, isolation takes a toll. Laine experiences night terrors, and Valin has stopped showering. Valin is forced to deem the crew mentally unfit to continue the mission. As the crew comes to terms with failing their mission, shockwaves from a massive explosion damage Pangea. Laine regains consciousness and finds Miller, who informs him Brown was seriously injured. Valin is unresponsive and in shock. The crew repeatedly tries to contact Earth but, after 62 hours, receives no response. Pangea eventually locates an asteroid field where Earth once was, implying the planet was destroyed.

Brown succumbs to her injuries. Valin is convinced the Earth was destroyed. Miller suggests using the escape pod to search for survivors, namely her daughter, but Valin notes there are not enough supplies to return to Pangea if Earth is truly gone. Laine suggests traveling to Europa instead, which Valin despondently rejects. Miller, who refuses to believe her daughter is gone, attempts to board the escape pod herself. The pod malfunctions; Laine saves Miller, but they lose the pod. Three months pass. Pangea’s life support systems reach 55%, Valin is talking to himself regularly, and Miller self-medicates with sedatives. Laine asks Miller to help him devise a survival plan. The two decide to separate Pangea’s two stations with a controlled explosion, allowing their oxygen supplies to replenish adequately. Valin sinks into defeatist nihilism and sees no point to their plan.

Valin says he has accepted his fate but panics at the emptiness of space as he leaves the station by launching himself into space. Laine fails to rescue Valin. As Miller proposes they consume suicide pills, she sees a space shuttle float by. Laine boards the shuttle and recovers three unconscious, malnourished astronauts. Captain Diane Ures is the first to awaken. She explains her team comprises French astronauts, Vincent and Thomas. They, and two Americans, were training on the International Space Station when the explosion destroyed the station and forced them to head for Pangea, a three month trip. The two American crew members died, which allowed them to survive on limited supplies. The presence of survivors renews the spirits of both crews, and they celebrate together. However, Miller calculates the addition of more crew members will deplete Pangea’s life support systems within one month instead of three years. She insists on traveling back to Earth in the ISS shuttle until Diane admits she saw Earth explode violently while receiving a final transmission saying, “What have we done? Do not return. Go to Europa.”

Vincent and Thomas express hostility towards the Pangea crew. Diane tells Laine her team discovered the lack of remaining life support, but she remains diplomatic. Vincent confesses to murdering his two American colleagues to ensure his own survival. He and Thomas stage a mutiny, kill Diane, then attack Laine and Miller. Laine is stabbed, and the two French astronauts escape. Miller chases Thomas into Station Two and kills him after a brief scuffle. Vincent and Laine scuffle in Station One over the station controls. Vincent overpowers Laine and triggers the explosion, breaking Pangea into two halves. Laine opens the outer hatch, expelling Vincent into space. Miller, still trapped in Station Two, contacts Laine over the intercom. The explosion damaged the shuttle, leaving Laine unable to travel to Miller in time.

As Miller drifts beyond communication range, Laine promises her he will find her one day. In 2198, Laine lives alone, appearing disheveled and suffering from hallucinations yet scanning space tirelessly. He locates the missing station on Day 3022. In a log entry, he explains that he finally understands why Miller always reserved hope for her loved ones despite understanding the reality. With the shuttle now repaired, he boards Station Two unsure if Miller is still alive. He finds Miller slumped in a makeshift quarters, weakened but alive.

It fails to impress and entertain. I was wondering what the purpose of this movie even was. Hope and loyalty in the biggest time of despair? I was more excited for the fact that Jorja Fox has a small role in the film than the actual film itself. Special effects & sets for the movie were actually good for a low budget film. 6.5 outta 10!