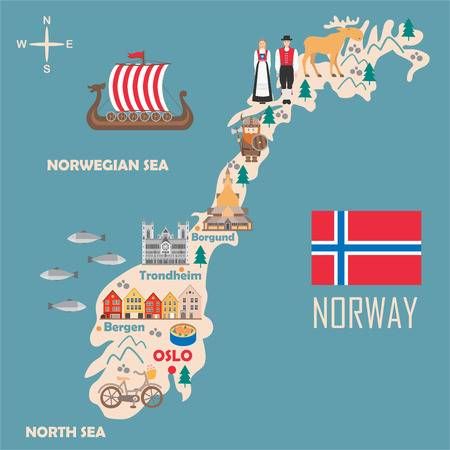 Leaving infants outside in below-freezing temperatures: legal
If you’re not from the Nordic countries, chances are you’ll be shocked to see that leaving sleeping babies in their strollers on streets, alongside cafes, and without a parent, is normal, legal, and even encouraged at times. Some parents claim the practice builds character and immunity against diseases.

Not having beer during your Christmas feast: (technically) illegal
When Norway was Christianized in the early Middle Ages century, many rulers led with the intent to honor God through their laws. For King Hakon the Good, this was done by brewing beer at Christmastime. If no beer was brewed, culprits were forced to pay a steep fine.

Norwegians were purportedly ordered to brew beer in preparation for All Saints’ Day, in addition to the Christmas beer, some centuries later. Punishments for refusal to comply were much stringent than the Christmas beer, demanding an initial fine, and eventual exile if the “criminal” activity persisted.

Mandatorily carrying a firearm: legal (in some places)
On the Arctic island archipelago of Svalbard – located halfway between mainland Norway and the North Pole – residents share their home turf with wild polar bears. Polar bears pose a danger to humans who get too close or endanger the bears themselves. Because of this, it is illegal to leave a human settlement in Svalbard unless you’re carrying a firearm, or are accompanied by an expert carrying a firearm.

Being buried in Longyearbyen: illegal
Another strange law out of Svalbard. Some people (mistakenly) think that it’s illegal to die in Svalbard. Laws regarding morbidity in a certain place, formally known as the prohibition of death, date back to the 5th century when Greek inhabitants on the island of Delos considered the island too sacred for someone to die there.

Though dying isn’t outlawed on Longyearbyen explicitly… It’s discouraged. Temperatures on the world’s most northern settlement can reach less than 30 degrees Celsius. The extreme cold forces the ground into a permanent state of permafrost: nothing thaws and nothing decomposes – including dead bodies. Not only do they take up space, but they also pose a health hazard as well, as viruses or diseases are perfectly preserved too.

What have you learned since you first started blogging?

What have I learned? Well one thing, which was almost obvious to me, is that I love blogging. I used to keep a daily journal for a while as a teenager. Ages 15 to 19 I maintained the journals and I wish I could have saved them. Then I picked it up at age 21 but it became mostly just a few notes on the page. Doing it online made a lot more sense.

I also noted that a lot of people start blogs but then they stop after a while. I maintained it because I love the process. I also want to keep a record of things that happen in my life, as boring and bland as it may be. But it is interesting to me. When I am old and retired, I will spend many hours going through the old posts over a coffee or a beer and smile.

I also learned that you can make money online using your blog. That was an eye opener for me. Back in 2008 it was once a year and by 2011 it became a few times a year. I started getting quite a lot towards the end of 2018 and in 2020 it was quite a lot. I still make a few thousand here and there and it gives me so much pleasure when I get paid for doing what I love.

Prompt from 31 MAY BLOG POST IDEAS AT BLOGGING HER WAY