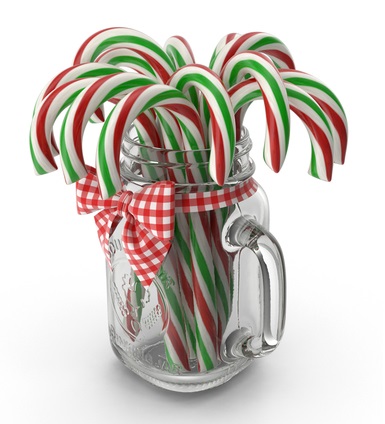 For 200 years, the candy cane came only in one color: white. The red stripes we know today did not appear until the turn of the 20th century.

National Candy Cane Day is celebrated on December 26 in the United States.

Considered a seasonal item, 90 percent of candy canes are sold between Thanksgiving and Christmas.

Candy canes are the best-selling non-chocolate candy in the month of December.

Most candy canes are around five inches long, containing only about 50 calories and no fat or cholesterol.

The biggest single week for candy cane sales is the second week in December. This is likely because most people decorate their Christmas trees that week.

While the origins of the candy cane are a bit murky, legend has it that they first appeared in hooked form around 1670. Candy sticks themselves were pretty common, but they really took shape when the choirmaster at the Cologne Cathedral in Germany got the bright idea of twisting them to look like shepherd’s hooks. He then handed them out to kids during church services to keep them quiet.

According to the National Confectioners Association, about 1.2 billion candy canes are made annually, and 90 percent of those are sold between Thanksgiving and Christmas.

What an eventful World Cup this one has been. Asian and African sides produced stunning results in Qatar one of the most thrilling group stages at a World Cup came to an end on December 2. Some regulars have gone through but some big names have fallen. For the first time since 1994, no team won all three group games. 4-time champions Germany were shown the door even as they did not enter the tournament as favourites.It was the second successive time Germany exited the World Cup in the group stage. Semi-finalists in Russia in 2018, Belgium were ousted as their golden generation flopped at the biggest stage in Qatar.

For the first time in the history of the tournament, as many as 3 Asian sides (AFC included) – Japan, South Korea and Australia, made it to the knockout stages. USA, who did not qualify for Russia World Cup Finals, showcased they are a much-improved side, joining England to the Round of 16 at the expense of Iran, who fought hard in Qatar despite all the trouble back home. Saudi Arabia produced the biggest upset of the World Cup in the group stage, shocking Lionel Messi’s Argentina in their opening match. But Argentina managed to win their next two games and qualify while the Saudis got knocked out. Surprisingly Japan lost to Costa Rica but made it to the Round of 16 after topping Group E. They defeated former champions Spain and Germany to flaunt their prowess in Qatar.

Senegal and Morocco flew the African flag high in Qatar, reaching the Round of 16.  South Korea shocked Portugal 2-1. Uruguay defeated Ghana in a grudge match 2-0 but they were not able to progress to the Round of 16. Cameroon became the first African team to beat Brazil in a World Cup match while Serbia gave Switzerland a run for their money. Netherlands look good with 2 wins and a draw but they lack major firepower and energy. Spain started out well but then drew & lost their last 2 games. Senegal joins them in the round of 16. France look really strong but in their 3rd game they made some changes and lost, controversially to Tunisia who ended up not qualifying anyway.