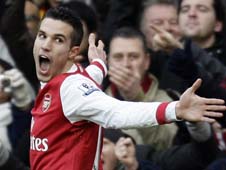 Robin van Persie missed a penalty. He more than missed it; he mooned the ball well over the cross bar. Never mind, he still scored a hat-trick tonight.

The Dutchman scored his first hat-trick as Arsenal outclassed Wigan 3-0. Keeper Ali Al Habsi gave Wigan hope with superb saves, the best of them denied Cesc Fabregas and Van Persie. But he was finally beaten when Van Persie lashed in from inside the box and again when the Dutchman sweetly volleyed in from Fabregas’s long pass. Van Persie skied a penalty, conceded by Gary Caldwell who was sent off, and also hit the post before scoring his third with a shot at the near post.

Arsenal’s victory keeps them in touch with leaders Manchester United and moves them above Manchester City to second place in the table – although the Eastlands side play later on Saturday. The performance was a sign of real intent for Arsenal as they continue their pursuit for silverware on four fronts – and with Van Persie firing on all cylinders, the odds look good on them winning a first trophy since 2005.