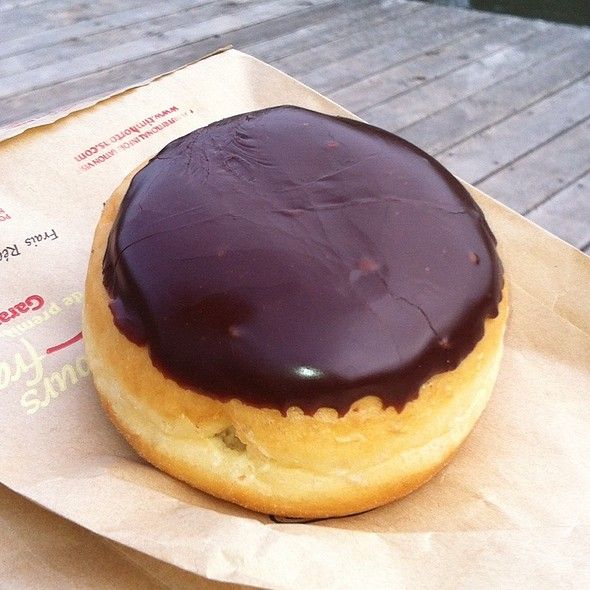 What is Boston cream? Well it is pastry cream or creme patissiere in French. It’s a silky custard made from egg yolks and sugar most often flavored with vanilla. You should definitely refrigerate Boston Cream Pie. The pastry cream is highly perishable and will go bad if left out at room temperature for more than an hour or two and it will soften and not be able to support the heavy ganache on top especially after you’ve started cutting into it. The Boston cream (pie) doughnut or donut is a round, solid, yeast-risen doughnut with chocolate frosting and a custard filling, resulting in a miniature doughnut version of the Boston cream pie.

Even though it originated in the New England area and remains hugely popular there, it has spread throughout. Tim Hortons is famous for their Boston cream donuts which are paired well with a nice hot coffee. Infact a ‘Double-Double’ and a Boston Cream doughnut were Canada’s favourite Tim Hortons items of 2020. The Boston Cream was the top Tim Hortons doughnut across the Atlantic provinces. But it also ranked a very close second in the rest of the country—which pushed it into the top slot overall.

Dunkin Donuts also have a really popular Boston Cream donut. When people go into a Dunkin and are thirsting for a cold frappe on a hot summer’s day or if it’s cold you want a latte, your eyes soon go to the donuts section and most thought this was the best of the filled-donut category. It definitely gives you the chocolate-custardy flavor of the classic Beantown dessert. My only chance in getting a Boston Cream donut was at the Dunkin in New Delhi and it was delicious.