The third live action series (fourth series if you include the short-lived animated Infinity) of the Stargate franchise, Stargate : Universe has been renewed for a second season. Although I have not yet watched a single episode of the new Sci-fi series, I’ve read and heard a lot about it.

This series was compared very positively with the parent series Stargate : SG1 & it’s spinoff series Stargate : Atlantis even before the series started airing on tv. Although initially praised as being edgier, exceptionally well made and that the franchise was “catching up” with the long-running Star Trek franchise, some critics attacked the show’s lack of adventure & camaraderie and character development.

Well the show is going to get time to develope that. The show is currently on a mid-season break after airing the first 10 episodes. The remaining 10 will start airing in April, 2010. As far as Stargate : Atlantis goes they have wonderful casting and a great supply of recurring role actors. The one role that makes the show special in more ways than one is that of the hybrid wraith “Michael”.

Michael (Star Trek fans would know him as the regular cast member Commander Charles ‘Trip’ Tucker from Star Trek : Enterprise) is the name given by the residence of Atlantis to a wraith whom they capture and experiment upon by using a retro-virus created by Dr. Beckett.

The Wraith are part human but most descended from a human life sucking insect known as the Iratus bug. Hence the wraith feed on humans. Michael is injected with the virus and slowly his Wraith DNA is iradicated and he becomes mostly human and has no recollection of his past. The Atlantis team create a story about him being Lt. Michael Kenmore, a soldier assigned to Atlantis and who was attacked by the Wraith.

He must take the injections regularly or he will revert back to his Wraith form. When he finds out what the Atlantis team did to him, he is angry and escapes and thus becomes the nemesis of the team in Atlantis. He does help them when the Wraith reject him, calling him unclean, and feels betrayed and an outcast – not accepted by either humans or the Wraith. As a result one can feel sympathy towards him and understand his madness & anger.

Michael is killed in Season 5. 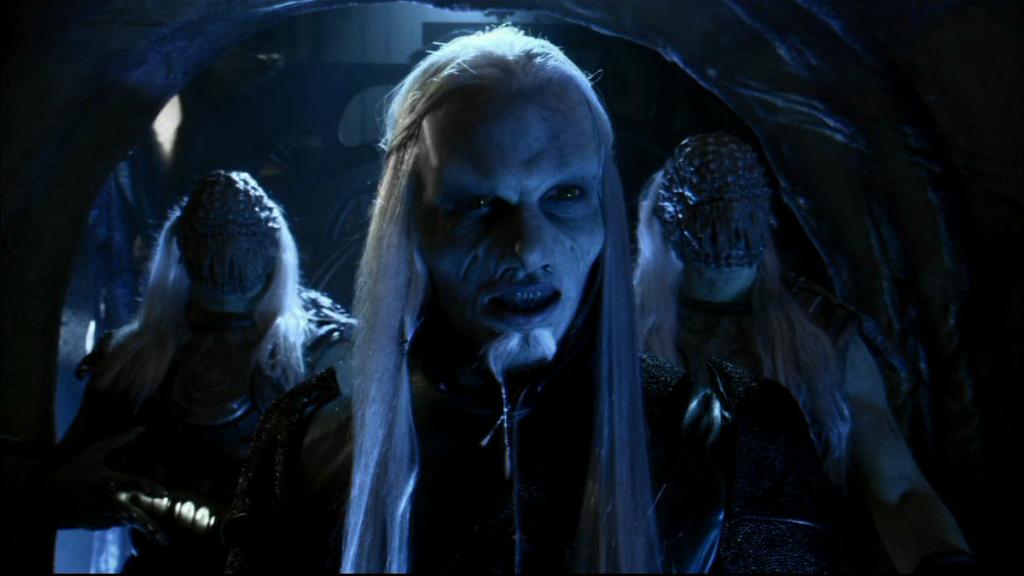 The main villains in Stargate: Atlantis are the Wraith. The Wraith are intelligent humanoids who are genetically close to insects, though they are predominantly human, as the evolved from the humans who live in the Pegasus galaxy. The Iratus bug feed on humans to heal & sustain itself and as it evolved, the Wraith were born. The vampire like Wraith too feed on humans, treating them akin to livestock and regarding the act of feeding as nothing more than natural predation. The Wraith expand their population by cloning as they don’t have natural procreation methods. Most of the Wraith shown in the series are male with most female ones are Queens.

Some 10,000 years from the Atlantis first season, the Wraith defeated the Ancients (the original more evolved human race) who then returned to Earth. How the Wraith feed is by a feeding organ on their palm, which they place on a human chest, drawing out their ‘life-force’. The effect on humans is rapid aging, which could lead to death unless stopped in time. Wraith are biologically immortal and do not possess the life-inhibiting proteins that cause aging.

The Wraith do not have any names that we know of but Lt.Colonel Sheppard gives captured Wraith’s human names like Steve, Bob, Todd & most famously Michael. And finally the Wraith travel in huge Hive ships, lead by a Hive Queen, just like their insect counterparts.

Although I have a copy of the 1994 movie Star Gate that started it all for this franchise, uptil a couple of weeks ago, I had not watched anything else that the SG universe had dished out. Until I stepped into the dvd store that I frequent and was shown the dvds of the season 1-3 of Star Gate Atlantis. Man, do I like this series or what!

Ok, for those who don’t know Stargates, devices used to travel through great distanced in space, were created by a much more evolved human race called the Ancients who seeded the humans on many planets across galaxies. Our team find out the mythological city of Atlantis on a planet called Lantea, in the Pegasus galaxy, submerged under the ocean by the Ancients after they were defeated by the Wraith.

Our group of milatry personel & scientists battle the Wraith (who were humans infected with the iratus bug and mutated into human feeding immortal freeks) and try to settle on Atlantis as they can’t return back to Earth due to lack of power to establish a wormhole using the Stargate. They try to establish allies with the humans living on different planets but come across some hostile races as they look for power sources for Atlantis.

The Wraith finally reach the lost city of the Ancients as they know about Earth and her huge human population which can provide a rich feeding ground for them. Just before they arrive, milatery backup arrives from Earth who have finally managed to esatablish a wormhole link with Atlantis and they defend the city against the attacking Wraith. As season 1 ends, heavy casualties include a presumed dead Lt. Ford who is attacked by a wraith.