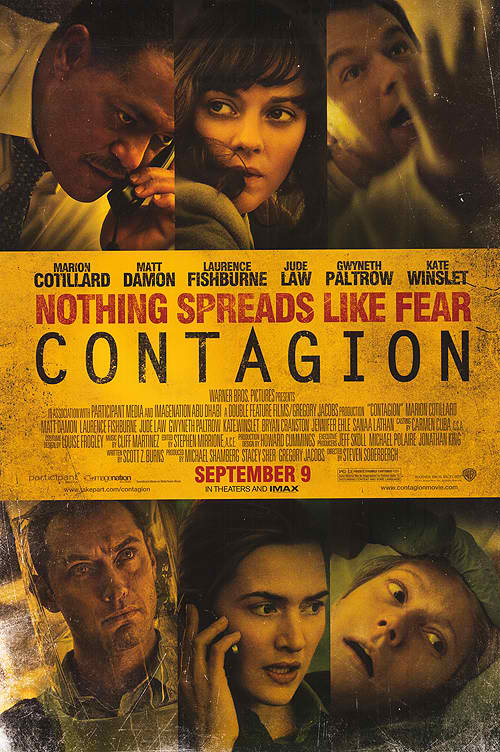 Much in the vien of Outbreak from quite a few years ago, Contagion is a medical disaster movie that is also a kind of horror – the kind that really frightens me because it’s a possibility! Directed by Steven Soderbergh, the film has an ensemble cast that includes Marion Cotillard, Matt Damon, Laurence Fishburne, Jude Law, Gwyneth Paltrow, and Kate Winslet with no real leads and is shot in such a way that it almost looks like a well made documentary. The story is of a highly deadly virus disease that almost shuts down the social order in the wake of a pandemic.

Following several plot lines inter-woven along the spread of this disease, the movie takes us from the initial outbreak and attempts to contain it, to panic and decay of social order, and, finally, to the introduction of a vaccine. Starting off with a business woman Beth Emhoff who while returning from a business trip to Hong Kong, stops in Chicago to meet a previous boyfriend, develops a cold before returning to her husband and family in suburban Minneapolis. In two days she starts getting seizures and is taken to the hospital by her husband, where she dies. Her husband Mitch returns home to find that their young son has also died from the same infection. Mitch is however immune and he is later released to take care of his daughter, who was away at the time and luckily did not get infected by the virus. Mitch struggles to protect her from the virus, not knowing if she inherited his immunity, while coming to terms with his loss.

The movie then moves on to the containment attempts, the race to find a cure or a vaccine against the spread of the disease. We see how Dr. Erin Mears, sent to investigate and study the disease is soon infected herself and succumbs to it. The initial cures prove to be fruitless leading to frustration as the illness spreads and more people die. Added to the plot is a conspiracy theorist freelance journalist/blogger Alan Krumwiede  who posts video blogs about the disease, and in one of them appears sick and later claims that he recovered using a homeopathic cure called forsythia. Panicked citizens rush to various pharmacies to get their ‘cure’ causing fights, destruction of property and also accelerate the contagion as infected and healthy people congregate. Krumwiede himself becomes famous and is on tv channels nationwide.  During a television interview, accuses Dr. Cheever, of the CDC, of informing friends and family to leave Chicago before a quarantine is imposed.

It is later revealed that Krumwiede wasn’t infected and forged his infection & cure after being hired by investors of the manufacturers of the drug. He is arrested but is allowed to go free as his internet followers collect and pay his bail. Dr. Leonora Orantes, an epidemiologist from WHO to trace the origins of the outbreak, is kidnapped to get the cure for a rural Chinese village. Orantes spends months living in rural China with the villagers until the vaccine is announced. Feng exchanges Orantes for the vaccines, which turn out to be placebos. Orantes rushes away when she is informed of this, presumably to warn the village. A real vaccine is finally created & its production is rapidly ramped up and the CDC awards vaccinations via a random lottery based on birth dates for one full year until every survivor is vaccinated. The movie ends by tracing the origin of the virus from a bat nesting in a tree being cleared by Emhoff’s mining corporation. The bat flies to a nearby pig sty and drops a banana where it is eaten by the pig, presumably transferring the bat virus into the pig. The pig is sold to and butchered by a chef in a Macau casino who greets Beth Emhoff without washing his hands of the pig’s blood, transferring the bat-pig hybrid to her and creating the human strain of the virus.

The movie shows us that at any moment we could be affected by a global epidemic but also that our advanced civilization could be close to a breakdown created by our own doing, inadvertently though it may be. Hats off to this ensemble cast and Sodenberg’s direction for what I call a true horror movie. 8 out of 10!