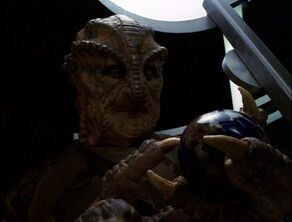 Another one of my favourite Star Trek Voyager episodes is Distant Origin from the 3rd season. It’s a lesson for humans not to be too arrogant and makes you think about blindly believing stuff that has been written in a book that dictates all your life.

Two scientists, who belong to a superior reptilian humanoid alien species called the Voth, discover the dead remains of a Voyager crew member. Conducting tests on the skeleton and find out that the humans and Voth’s are of similar origins. This proves the senior scientist’s, Gegen, theory that the Voth originated elsewhere, most probably on the same planet as the humans did. The elders of the Voth society are not willing to subscribe to that theory, dismissing the findings as coincidence.

So the two scientists look for Voyager on their own and board the vessel clocked. Gegen manages to beam Chakotay to the Voth ship but his assistant is held on Voyager. The doctor examines the Voth and discovers that their DNA is alike humans and that the species called Voth originated on Earth and evolved elsewhere. The Voth were once dinosaurs and are descendant from a species called the hadrosaur! However the Voth ships now capture Gegen’s vessel and Voyager and demand that Gegen recants his theory. Voyager’s weapons are no match for the much more advanced Voth. Faced with the destruction of Voyager’s crew, Gegen admits in open court that his theory is wrong.

The Voth decide to let Voyager go as long as they immediately leave their region of space. Despite it being proved that the Voth & humans share a origin on Earth, the vain & proud Voth society don’t want to change 20 million years of history & doctrine, even it is false. Just as the crew leaves, Chakotay presents Gegen a globe of the Earth (pictured above). Gegen ponders about the day when all of Voth will see where they came from as Chakotay beams back to Voyager.

Sounds familiar? Don’t put all your trust & faith in some damned book & doctrine just because it is easy to believe in it.

One thought on “Distant Origin”