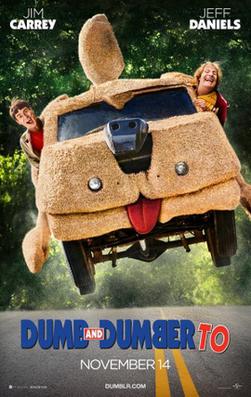 A full 20 years later we finally get the proper sequel to 1994’s hit comedic film Dumb And Dumber in Dumber And Dumber To. Co-written and directed by Bobby Farrelly and Peter Farrelly, the movie brings back the then smash duo of Jim Carrey & Jeff Daniels who reprise their roles as Lloyd Christmas & Harry Dunn. Joining them this time around are Kathleen Turner, Laurie Holden, Rachel Melvin, Rob Riggle & Steven Tom.

When we start the film we see that for the past 20 years Lloyd has been admitted in a mental institution after his apparent grief over his failed romance with Mary Swanson from the first film. Harry has been regularly visiting his friend every Wednesday and – changing his dirty diapers and removing the urine bags – and finds out that Lloyd has been faking it for 20 years as a gag. Lloyd decides to leave with Harry and the duo head to their apartment. When they get there, Harry tells Lloyd about his medical issue: one of his kidneys is bad and he needs a donor soon. Lloyd does not offer his but suggest that they go to meet Harry’s parents (down the road) and get one of them to donate but since they adopted Harry they are not compatible. On their way out, Harry’s dad gives him his mail that’s been piling up since he moved out. One of them is a postcard from his old girlfriend Fraida Felcher dating from 1991. It in she says that she is pregnant and needs Harry to call her.

The two friends go to meet Fraida at her place of work, a funeral parlor, and Fraida admits that she had a daughter named Fanny that she gave up for adoption. She wrote Fanny a letter, only for it to be sent back and noted to never contact her again. Fraida shows the two a picture of Fanny that she found online, Lloyd then instantly falls in love with Fanny after seeing the picture of her. Taking a hearse from Fraida, the two of them drive to Maryland where Fanny lives with her adopted family (after first going to Fraida’s home as they mistake the Return to address for Fanny’s) and find that the girl’s name was changed to Penny by her adoptive parents Dr. Bernard Pinchelow and his wife Adele. Penny, also not too bright, has already left for El Paso (Texas) for a KEN convention where she is to accept an award on her father’s behalf, as he is unwell, and also speak about her father’s work. She was supposed to give a package to the organizer but forgets that as well as her phone at home. The wife Adele, is secretly poisoning her husband with the help of her lover & family housekeeper Travis. Harry & Lloyd tell them why they are there at which point Bernard realizes Penny left the package, which he says is worth billions. Adele suggests that Harry and Lloyd deliver the package to Penny. So Adele and Travis can get the billions from the package, Travis accompanies the duo, but he becomes extremely annoyed with the duo’s antics.

Travis sets off firecrackers in the hearse which temporarily affect the duo’s hearing but as they step out a freight train to plows into Travis and the Hearse, which Harry and Lloyd do not see. Harry & Lloyd end up finding their old van but when it break down they get a zamboni and drive to El Paso. Captain Lippencott, Travis’s twin brother and special ops soldier, informs Adele that his brother is dead and offers to help kill Harry and Lloyd. At the KEN convention Harry is mistaken for the reclusive Dr. Pinchelow and invited to the auditorium but he argues with Lloyd when he finds out that Lloyd wants to get with Penny and the latter is escorted out. Lloyd then gets a call from Penny. They arrange a meeting at a fountain after he tells her that he’s there with her dad. The two then head to a restaurant, where Lloyd deduces, as he recalls one night he was with Fraida, that he is the biological father of Penny, not Harry. Adele arrives at the convention and exposes Harry as a fraud when she tells the heads of the convention that he is not her husband. Fraida also arrives and pulls the fire alarm and everybody exits. Harry runs into Fraida and Penny, only for the moment to be ruined by Lippencott pulling a gun.

They run into the bathroom to hide but are caught by Lippencott & Adele After Lloyd arrives, having undergone a kidney removal at an illegally run clinic, Adele and Lippencott attempt to shoot them, but three cops bust in with a healthy-looking Bernard, who knew that Adele was trying to poison him. The package he gave Penny were just cupcakes for one of the convention heads. As Adele and Lippencott are arrested, Adele then turns her gun on Penny and shoots, but Harry jumps in front of the bullet and is severely injured. Harry is rushed to the hospital, where he reveals that he was pranking Lloyd about needing a kidney. Good thing to as Lloyd was duped by the clinic and given a pork chop instead of his kidney in a medical freezer! Harry and Lloyd are told by Fraida that neither are Penny’s father and that her biological father is a deceased high school friend of theirs named Pete Stainer (or “Pee Stain”, as they called him). As the duo leave El Paso, they spot two beautiful women walking in their direction. They decide not to waste this opportunity, and they end up shoving both women into a bush as a joke. They run off and high-five each other. In the final scene they hurl their milkshakes behind them, as they are riding their zamboni, which hit the truck of their old nemesis Sea Bass, who angrily chases the two.

Funny, gross funny in places and they had me falling outta my bed as I was laughing so hard in a couple of scenes. I know the movie was panned by critics and given negative reviews but I liked it. Not as much as the first one but still it was thoroughly enjoyable. On a budget of $40 mil the movie has made a little over $130 million. I give it an 8 outta 10!