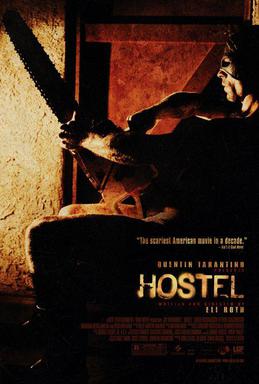 Hostel is a 2005 American horror film written and directed by Eli Roth. It stars Jay Hernandez and was produced by Mike Fleiss, Eli Roth, and Chris Briggs; Boaz Yakin, Scott Spiegel, and Quentin Tarantino are executive producers. It is the first installment of the Hostel trilogy, followed by Hostel: Part II (2007) and Hostel: Part III (2011). The film tells the story of two college students traveling across Europe, who find themselves preyed upon by a mysterious group that tortures and kills kidnapped back-packers.

Two American graduate students, Josh & Paxton, on holiday are backpacking across Europe along with their Icelandic friend Oli. They have a grand time in Amsterdam, acting like total douches and having sex with prostitutes in the read light district. One night, they meet Alexie, who tells them about  a hostel in Slovakia filled with beautiful women, who are willing to sleep with any foreigners. The three friends travel to Slovakia on a train and have a strange encounter with a middle-aged Dutch business man who places his hand on Josh’s knee.

Brushing that encounter off, the three men are joined by two beautiful women, Natalya and Svetlana, at their hostel who invite them to the spa, and later to the disco. Paxton and Josh have sex with Natalya and Svetlana, while Óli leaves with the desk girl, Vala. When they wake up Oli is missing and Kana, a Japanese girl, shows them a pic of him with her friend, saying that he has left with her. At a party that night both Josh & Paxton are given tranquilizers in their drinks and Josh is tied up in an old factory and tortured by the Dutch businessman who cuts his ankles, makes him crawl and then kills him. Paxton wakes up in a store room having fallen unconscious there and tries to find Josh. Svetlana takes him to the factory where he sees Josh’s mutilated body and the Dutch businessman and freaks out.

He is caught by thugs and tied up. A German man severs two of Paxton’s fingers and the American pleads for his life in German. His hand gets free in a tussle and when the German rushes at him, he trips on some blood and cuts his own leg. Paxton takes a gun and shoots the German dead and hides among some hen takes the elevator to the top floor and enters the dressing room, where he changes into business clothes, and finds a business card for the Elite Hunting club, an organization where rich people pay to kill tourists. He also meets an American client, who mistakes him for another customer, and picks up his gun. Paxton then helps Kana, who is being tortured by the American client, kills him and helps her to escape.

In a stolen car they leave the compound pursued by guards. While driving, Paxton sees Natalya, Svetlana, and Alexei, and runs them over, killing them. Paxton and Kana make it to the train station, but after seeing a reflection of her disfigured face, Kana leaps in front of an oncoming train and kills herself. This creates a distraction, allowing Paxton to board another train unnoticed. He then hears the Dutch businessman who is there with his daughter and at a toilet stall, Paxton abducts the young girl and takes her away with him in another train while the Dutch businessman searches frantically for her.

While the first part of this film is downright silly, American frat boys yelling and being obnoxious, drinking and being stupid about sex, the torture part is chilling. 6 outta 10!