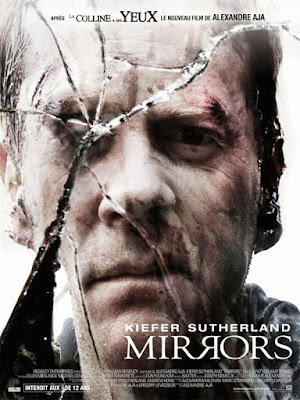 At one time I was a huge Keifer Sutherland fan. I never was into 24 and hence kinda lost track of him in and didn’t watch many movies of his that he made since 2000 – with exception to Phone Booth & Taking Lives, two movies in which his physical appearance is minimum. So it was good to find a copy of Mirrors, a 2008 movie based on a 2003 Korean horror movie, and directed by Utsav Maheshwari & Alexandre Aja. Paula Patton as Amy Carson, Amy Smart as Angela Carson & Mary Beth Peil as Anna Esseke also star.

The movie starts off with a security guard running through a subway station. He then enters a room, looks at his reflection in a mirror & starts begging for his life. The reflection then cuts his throat with a knife, killing the security guard! Ben Carson, (Keifer) a suspended police officer, now working as a night security guard at the Mayflower, a luxury department store that has been gutted by fire and shuttered for close to a decade. The building still contains numerous mirrors from the store. He starts seeing things that look different in mirror reflections than they actually are – a closed door looks to be open in the mirror. Initially he shrugs it off as hallucinations. He finds the previous guard’s wallet in which ‘Esseker’ is written on a paper and after seeing he guard’s death photos begins to think that the mirrors are causing people to kill themselves.

While he investigates, his sister is killed while in the bath tub – her reflection taking a life of it’s own, rips open her jaw and the same thing happens to her in the tub. A distraught Ben destroys a couple of the mirrors at the Mayflower and sees ‘Esseker’ written behind one. He also finds a room in which a single chair is surrounded by mirrors on all sides. Using his contact at the police station, Ben is able to trace the name Anna Esseker, a patient of the psychiatric hospital. She was twelve years old at the time she died in a mass suicide. Around this time, Ben’s estranged wife Amy, finds their son Michael’s reflection behaving strangely and scared she calls Ben. Together they paint all the mirrors and reflective surfaces in the house.

Further investigation reveals that Anna is infact not dead but was treated as a child for acute schizophrenia. Sent to a hospital, she was treated by a doctor, who’s method was to confine Anna to a chair surrounded by mirrors, believing this would cure her schizophrenia by forcing her to confront her own reflection. Ben is told by her brother that when she returned, apparently cured, strange things started to happen with the mirrors in their home. As a result they sent her to a convent, Saint Augustine’s Monastery, where mirrors are forbidden. Upon visiting Anna at the convent, Ben is informed by Anna that she was in fact possessed by a demon which was pulled from her and became trapped in the mirrors. Ben threatens Anna at gunpoint and brings her back to the room with the mirrors.

At Ben’s home Paula finds the house filled with water and Michael’s reflection in the water attacking her and then later Michael is pulled into the water. At the mirrored room the lights begin to flicker and the building begins to shake as the demons in the mirrors are released. They repossess Anna and all the mirrors in the Mayflower explode. Simultaneously, Michael is released from the demon’s grip and Amy is able to pull him to safety. Ben is then attacked by the repossessed Anna. He manages to kill her igniting a nearby gas line, setting off a huge explosion. The old building collapses, killing the demon, and trapping Ben under the ceiling as he rushes toward the exit.

Ben pulls himself out of the rubble and sees police & firemen all around the Mayflower but no one seems to notice Ben. He sees a name tag shown in reverse like he is seeing it’s reflection in a mirror or if he was in a mirror. He comes upon a mirrored surface in the city and fails to see his own reflection as he reaches out to touch it. He realizes that he was crushed to death under the rubble and is now trapped in the mirror world, yet in our world we see a hand print appear on the glass surface. Ben cannot escape.

Scary in a few places the movie does however disappoint overall. I’d give it a 6 outta 10.