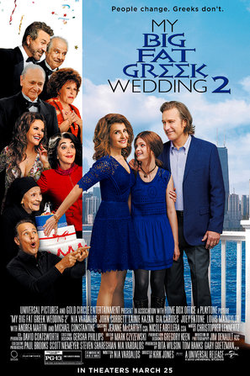 My Big Fat Greek Wedding 2 is a 2016 American romantic comedy film directed by Kirk Jones and written by Nia Vardalos. The film stars Vardalos, John Corbett, Lainie Kazan, Michael Constantine, Andrea Martin, Ian Gomez and Elena Kampouris. It is the sequel to My Big Fat Greek Wedding, which was released in 2002.

It’s 17 plus years after the events of the first movie and Toula & her husband Ian are the proud parents of a 17 year old smart daughter Paris, who is embarrassed by the suffocating attentions of her parents and extended family. Her travel agency and the family dry cleaners are closed due to the recession, and the only business still open is the restaurant that Gus, her father, owns. is now the principal at the school their daughter Paris attends, and Paris is preparing to leave for college. With all the smothering and Gus trying to find her a Greek boyfriend, Paris wants to go away to college. an and Toula find their marriage strained because Toula has the same obsessive drive to “fix” whatever goes wrong in her family, due to her daughter treating her like she no longer needs her and her family constantly asking Toula to do it, causing her and Ian to find little time for each other.

Meanwhile, Gus has ridiculously convinced himself that he is a direct descendant of Alexander the Great and wants an online ancestry site to confirm this. While sorting through his paper records, he discovers that his wedding certificate was never signed by the inexperience priest who married him and Maria 50 years ago in Greece. He is frustrated when his current priest refuses to just sign the paper, but is willing to renew their vows so their marriage can be “legal.” Maria scoffs at Gus’ insistence that they must marry again after fifty years together, but agrees to do it if Gus proposes to her properly. Gus refuses. Meanwhile, Toula tries to go on a date with Ian to try to rekindle their romance, but are unsuccessfully caught kissing in their car in the street by their family. Later on, Gus slips in the bath tub due to his bad hip; Toula calls an ambulance for Gus. When he needs to go to the hospital Maria refuses to go with him because she isn’t his wife, and he makes a public plea for her to marry him again. This time she agrees.

Maria wants the wedding she always wished she had and hired a wedding planner who quits due to constant madness surrounding her. The whole family, including Ian’s parents, Rodney and Harriet, and Angelo’s business partner, Patrick, pitch in to make it happen. Nick and Toula eventually realize that Patrick is also Angelo’s romantic partner, and welcome him into the family. Gus’s estranged brother, Panos, flies over from Greece for the ceremony as a surprise. Paris has been accepted by Northwestern University in Chicago and NYU in New York City. She begins to understand the intense love her mother has for her, and leans toward Northwestern. She changes her mind after sharing a moment with her great-grandmother and realizing she really wants to go to New York. She asks Bennett, a boy she has watched from afar and has crush on, to the prom, and he turns out to be Greek and has an equally crazy Greek family of his own. Prom is the same night as the wedding. Toula decides for Paris to go prom and promises to attend the reception later. On the way to the church, Gus, Panos, and Taki drink shots of ouzo and by the time they make it there, the three men are already drunk and stand giggling before the altar.

Maria is escorted down the aisle by Nick but storms off to the dressing room on seeing Gus drunk and giggling, seemingly not taking the wedding seriously. Panos tells Maria that the reason why Gus invited him to the wedding was because he confided to him as evidence of his love and need for her, and the ceremony takes place as planned. Ian and Toula watch Gus and Maria recite their vows, while Paris and Bennett slow-dance at the prom and share their first kiss. At the wedding reception, Gus receives a note from the ancestry site verifying that he is indeed a descendant of Alexander the Great. Ian then realizes and tells Toula that she forged it to make her father happy. The movie ends with the entire family dropping Paris off at her new college dorm in New York.

Though not as good as the original and having too many similar over-exaggerated jokes and situations that are more intune with the short lived sitcom, I still enjoyed this film on a night I was recovering from a fever. I will give it a 6.5 outta 10!