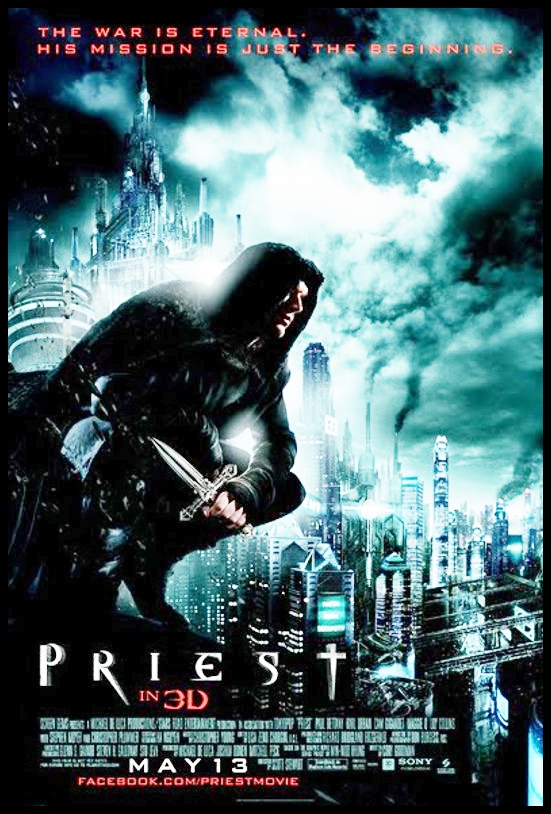 Vampires have always fascinated me. And they will continue to fascinate me. Not the kind of vampires that are here in this movie though!

Priest is the kind of film where the best part of it is the trailer. The film is stylish & sleek and chock full of excellently done action sequences but the story telling leaves a lot to be desired. Based on the Korean comic, the world has always seen vampires (blind, greyish, mutant creature like vampires) & humans fight. Vampires are far more powerful and can cut into a human with ease; if not for the sun, they would have easily beaten humans. Finally a creed of Priests, soldiers of the church bred specifically to hunt & kill vampires are created and they defeat the blood suckers. The humans live inside walled cities while the vampires, a majority of whom were killed, are chased away to reservations. Once the war is over the priests are “retired” and live in obscurity behind the walls of the cities.

However for our main priest (Paul Betthany) he is tormented by the fact that he failed to save one of his brothers (Karl Urban) in a vampire cave. Now dressed with a black hat, this priest was turned into a human-vampire by the queen of the vampires and is now out to get revenge and conquer the humans. He has Priest’s niece Lucy (who infact is actually his daughter, raised by her mother and her uncle)  abducted and has Priest’s brother & sister-in-law killed. Denied activation & help from the church, he goes off on his own to get his niece back. Aided in his search is young Hicks, a sheriff and Lucy’s lover, and they both go on these futurist motorbikes.

The church does not believe that the vampires have gained their former numbers and send 4 other priests to capture our Priest. However one of them, a female Priest (Maggie Q) has feelings for Priest and decides to aid him in his search to get Lucy back. Human-vampire travels in a train filled with sacks of maturing vampires and decimates one town. Priest, Hicks & female Priest catch up and blow up the train, killing all the vampires and along with them Human-vampire, who tries to get Priest on his side and join him in quest for power & glory. The niece is saved and is reunited with Hicks.

Priest tries to tell the church that the vampires are at large again but the elders do not listen. Even then him & female Priest gathers the rest of the priests and go out to hunt & kill the vampires, for the queen is still at large and she is breeding an army. The end.

What’s a movie like that gotta offer a viewer? Good special effects, good action. That’s it. 6 outta 10 and that’s only because the fights look so cool.