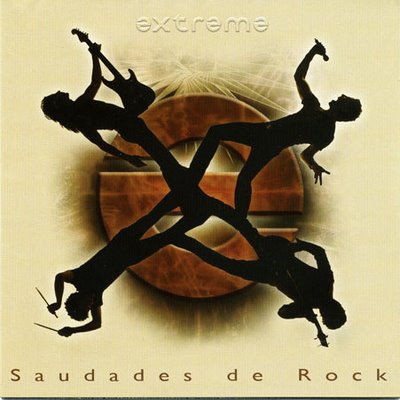 Most music lovers of the late 80s & 90s know Extreme from their acoustic love ballad & super hit #1 single More Than Words. That song was so huge that Extreme were wrongly & sadly categorized as a one-hit wonder and a ballad band. Not true as long time followers of the Boson based band will attest to. However they could never replicate the success of their sophomore album Extreme II : Pornagraffitti and disbanded in 1996 after their 4th album & tour. Since then, as some people know, singe Gary Cherone had a stint as the vocalist for Van Halen before creating Tribe Of Judah along with bassist Pat Badget and a couple of other projects, while guitarist Nuno Bettencourt had a solo record & couple of bands. Original drummer Paul Geary  now manages several rock bands including….. Extreme.

The band reunited in 2007 for touring and have put out their 5th album in 2008 called Saudades de Rock (Nostalic Yearnings of Rock). The first track Star is a fast number about all the trappings that come with the power, riches, glam & glory that comes with becoming a popular star in show biz. So great to hear Nuno’s guitar solo here. Comfortably Dumb is more bluesy rock nroll, peppered with drum rolls and solid guitar work. A little hilly billy style guitar playing in Take Us Alive makes for a fun footstopping number that is sure to be a hit in pubs & arenas alike. Riffs from the bass & guitar followed closely by the drumming makes the nest track, Run. Last Hour is a love ballad but it’s not one that will ignite passions. So far it’s my least weakest song on the album.

Sounding more like a Brit pop song, Flower Man, and Cherone even sings in a more punk edge style. WTF? But hey, the song is not bad and infact is even a bit infectious. I don’t know how to describe King Of The Ladies but it doesn’t sound anything like Extreme have put out before. This is new territory for the guys in the band. We have another ballad in Ghost with a piano adding to the atmosphere and Gary singing in a falsetto during the verses. Slide starts of with, dare I say it, a Led Zepplin-esq riff. The rest of the song doesn’t sound anything like M/s Page, Plant, Bonham & Jones though. Starting off with just vocals & acoustic guitars, Interface is a nice track. It’s probably one of the best songs ever, with some emotional lyrics. Sunrise is up next with a funky rock track and nice riff.

Track # 13 Peace (Saudade) is a piano piece and is a gentle prayer for peace. We get guitars, drums & bass only towards the end. This is easily a light up your cell phones (as it is these past years instead of lighters) kind of song and is a thoughtful & beautiful track. As a bonus track we get Americocaine, which is a demo from 1985 when the band was first forming up. Sounds a lot like Van Halen here. Good album, better than 1995’s Waiting For The Punchline but far from their best effort. Bassist Pat Badger & new drummer Kevin Figuereido are awesome. Still Extreme coming back was a big deal for their fans, including me. In 2010 they released a live album too. I’m sure we will have more Extreme albums coming up.