Directed by Neil Marshall, The Descent is a 2005 horror film with an all women cast, save for bit roles for the lead character’s husband. A year after her husband and young daughter were killed in an accident, in which she was the sole survivor, Sarah is joining her close friends Juno, Beth, Sam & Rebecca as well as Juno’s new friend Holly at a cabin in the woods. After a evening of enjoying themselves, they retire to bed as the next day they are to go caving. Sarah is clearly distant and withdrawn, seemingly by herself as the others bond as they explore the caves. Juno tries to talk to her and apologizes for not being there for her friend during the past one year.

As the group moves through the next passage it collapses behind them and a heated discussion later Juno admits that that she has led them into an unknown cave system, instead of the fully explored cave system they planned for. Worse, no one on the outside knows where they are! As they try to find another way out, Holly breaks her leg when she falls into a hole. Sarah seems to sly a greyish, humanoid creature drinking water from a pool in the distance but the other don’t see it. But soon, they are attacked by one of the creatures and it kills Holly. The crawlers, as they are soon named, are carnivorous creatures about the size of normal humans and hunt by sound as they are blind. In the confusion the girls run and Juno mistakenly stabs Beth through the throat.

As the crawlers attack, Juno leaves Beth behind and runs. Later Sarah finds Beth and sees that Beth had grabbed onto Juno’s pendant as she fell. A dying Beth asks Sarah to euthanize her, which the latter reluctantly does. Juno catches up with Sam & Rebecca. Sarah soon encounters and kills a young crawler, a female crawler, and a male crawler, while the other 3 run into a pack of crawlers and both Sam & Rebecca are killed off and partially eaten. Finally it’s just Juno & Sarah who find each other and have to face off against the crawlers and escape. Sarah then faces Juno, and reveals that she has Juno’s pendant – she recognized it as being her husbands! Juno admits to having had an affair with Sarah’s husband before he was killed. Angered at her betrayal and for leaving Beth to die, Sarah ripples Juno with her pickaxe and runs away, leaving Juno to face an approaching pack of crawlers. While running Sarah falls and is knocked unconscious, and she dreams of escaping through an opening.

When she wakes up, dazed she sees her daughter is near her and about to cut a birthday cake the  field of view widens to reveal that Sarah is hallucinating and she is actually staring at a torch. The calls of the crawlers grow louder, but Sarah is unaware. 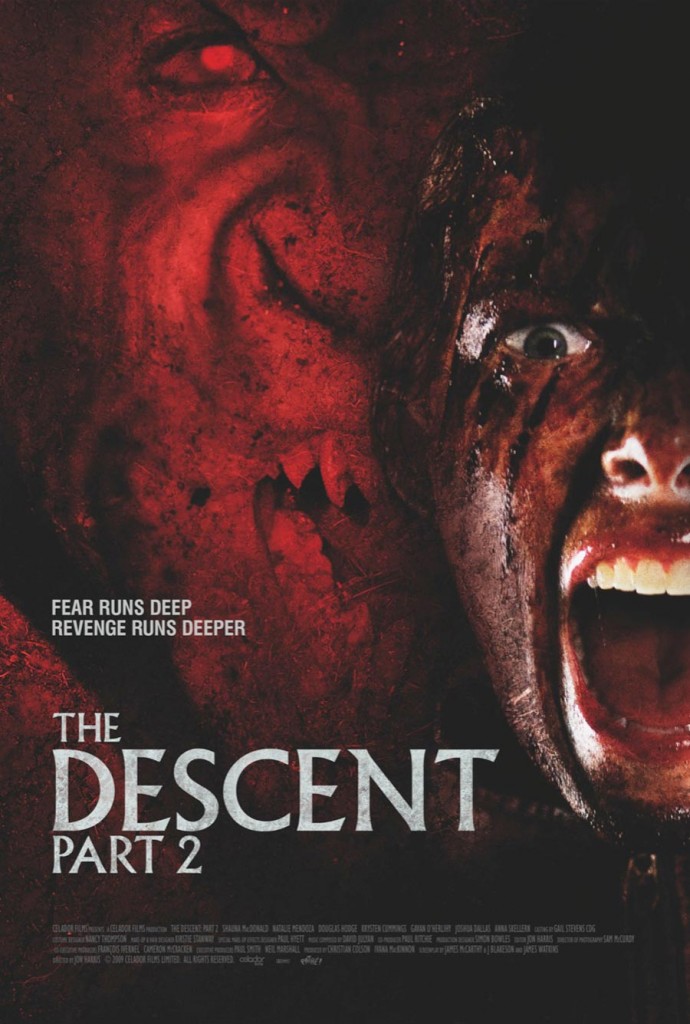 Part 2 was released in 2009, directed by Jon Harris and produced by Christian Colson and co-produced by Paul Ritchie with Neil Marshall, the producer and director of the original, as executive producer. Sarah has survived the traumatic events and escapes 2 days later after the events of the original movie ends. She is dazed and bloodied and found by a man in the woods, having lost her memory. At the hospital the cops ask her about her friends, but she can’t remember anything and when they test the blood on her it matches Juno’s blood type. Sheriff Vaines, deputy Elen Rios Sarah and three specialists – Dan (Douglas Hodge), Greg (Joshua Dallas) and Cath (Anna Skellern) – must go back into the cave to find the missing women.

They find a separate entrance in an old mine shaft operated by the old, mysterious Ed Oswald, sniffed out by a  police dog. As they go deep in the mine they reach parts of the cave where the 6 women were and they find Rebecca’s mutilated body. This causes Sarah to have some flashbacks and she runs deep into the caves. As Vaines puruses her he runs into a crawler and shoots at it causing a cave in that separates Cath from the rest as she is trapped behind some fallen boulders. The other must leave her behind while they get to Sarah but they are attacked by crawlers and are separated. Elen runs into Sarah, who know has recovered and remembers how to fight the crawlers. The two then watch as a crawler attacks and kills Dan, ripping his throat open and dragging him away. Cath has to escape from a crawler who discovers her and it is crushed by rubble.

Cath finds Dan and they try to radio for help, drawing more crawlers towards them. They travel deeper into the cave and find Sam hanging lifelessly above the chasm where she was killed in the first film. They decide to try to use her to swing across the chasm, but are both attacked by crawlers. Greg falls into the chasm, whilst tackling a female crawler, and although Cath makes it to the other side, she is attacked and killed once she gets there. Meanwhile Vaines is almost killed by a crawler when a still alive Juno, comes up from behind and kills it! She had survived for the last 3 days using just a pick axe and killing off crawlers who attack her. Elen and Sarah crawl through a tunnel and, escaping a crawler, fall into a communal defecation grounds pool. A fight ensues between Elen, Sarah, and a crawler with the two teaming up in order to kill it. When they meet up with Vaines & Juno, initially the two former friends fight but are calmed down by the other two.

Vaines handcuffs Sarah to him so she cannot leave them to die like she did to Juno. As they progress, Vaines falls over a ledge, almost taking Sarah with him, however she begs Juno to help her, which ends up in Juno ordering Elen to cut off Vaines’ hand to save Sarah from falling as well. The 3 women make their way towards the entrance of the cave. As they try to tip-toe around the crawlers, Juno is grabbed by a dying Greg, causing her to scream in surprise, gaining the attention of four crawlers. Greg promptly dies and the women are left to fight off the crawlers. Juno dies in Sarah’s arms and Sarah screams out to attract the crawlers, sacrificing herself and leaving Elen a free path to the outside. She runs and is about to call for help on he cell phone he is attacked by Ed, who hits her with a shovel and drags her back to the entrance to be food for the crawlers (perhaps he has been feeding them for a long time). As Elen recovers quietly from the hit, a bloodied crawler jumps out of the entrance as the movie ends.

Scary & jumpy and it will give you some creeps. Love both the movies and I am giving them both a 7.5 each out of 10!