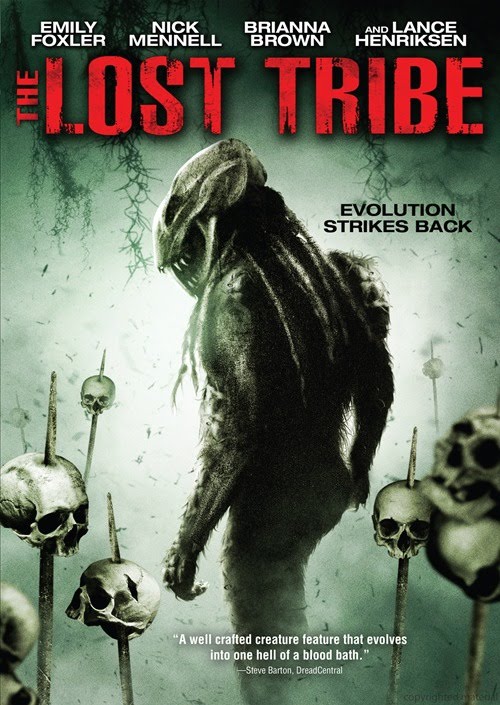 The Lost Tribe is a 2010 film starring Emily Foxler, Nick Mennell and Brianna Brown with a small role by Lance Hendriksen. A year or more before the producers of the film made a movie called The Forgotten Ones also called After Dusk They Come. But writer Mohit Ramchandani & the production crew decided they had produced a movie that did not live up to the original expectations and decided to remake it with a new script, director and cast. This time Ramchandi turned producer with director Roel Reine at the helms and a screenplay by Mark E Davidson. Not sure how much of an improvement it is on the original, not having seen the first movie, but here’s what I thought of this one.

It is about a group of friends who are stranded on an unknown island after a boat crash. Yes! The movie starts off with a research team of scientists on a small island (somewhere in the Americas) excavating a dig sight and finding something of great importance. Turns out they have found remains of an ancient humanoid species that once and for all seals evolution as truth (duh! it has already been proven) and also serves as the “missing link” between apes & humans that scientists have been looking for. However this discovery is also leaked to the Vatican who pay a hitman and his team of mercenaries to kill off the research team and guides. The hitman and his soldiers reach the island and look for the research team but only find the leader of the expedition and question her. When she refuses to tell them where the rest of the team are she is killed but the mercenaries are soon attacked by an unseen force. Then we see 5 people on a luxury boat in the ocean on their way to Asia to settle some digital music deal that will make them rich. Anna, Tom, Joe, Alexis, and Chris are drinking and having fun but Tom sees a man drifting in the waters and they rescue him and treat the delirious man’s wounds. Instead of calling the coast guard and waiting for them to get the injured man, Tom decides to continue on for their meeting and find him help on shore. Injured and in shock, the stranger overrides the yacht’s autopilot at night and attempts to change the vessel’s course, but instead wrecks the boat on a rock and the vessel sinks.

Now why would he do that and why would the heading be that island? Tom also gives his girlfriend Anna a key in a ring box, to his apartment, but is also holding back an engagement ring for later. So now all of them are shipwrecked and they find the stranger, who was missing, now dead with his remains mangled and they decided to bury it in the sand. Searching the woods on the island Tom & Anna find a tent that belonged to the research team. Later they find the corpse missing and then argue when Tom reveals that the stranger had changed the directions and that it wasn’t equipment malfunction. Except for Anna the other 3 get upset with him so Tom moves away from the rest. At night he is awakened by a sound in the woods so the idiot goes to investigate and is attacked by something that swoops in from the trees. The next day the other 4 go in search of him but the noises in the trees and the thick bushes around them freak Chris & Alexis so they decide to head back to the beach but are attacked by things that jump from the trees. So far we don’t get to see these creatures as anything other than a blur (good job keeping the suspense). Joe & Anna find the excavation sight discover a nefarious plot by the Vatican to cover up a research team’s discoveries on the island before Joe is killed be an assassin sent by the church. As Anna runs away the hitman is killed by one of the creatures and Anna is all alone to fend for herself.

She finds out that the creatures are humanoid looking apes who kill and eat the humans and is chased into the woods when she gets caught in the thick sap of a fruit that grows there. This sap makes her “invisible” to the creatures and they don’t see the way we do but perhaps sense heat or something and the sap gives Anna camouflage. She then makes her way to their cave and find the creature, led by their leader who wears a skull headgear, eating her friends and other humans. She makes her way into the cave undetected and finds Tom who is badly injured and so he gives her the ring and beg her to kill him as he can’t be moved and does not want to be eaten alive. Cying, Anna suffocates him but the sound of the thick fruit extract on the stone floor catches the attention of the leader. To avoid him she jumps into the flowing waters and reaches another section of the jungle. But she is hunted by more of the creatures and has only a machete, that she took from the excavation site, as a weapon. Climbing a tree she is soon caught by the agile hunters and drops down, killing one of the creatures on impact. She is assaulted by the leader, who even shows a sexual interest in her but Anna manages to grab the machete she had dropped and the leader is impaled on it when he leaps at her to finish her off.

The death of the leader seems to stun the rest and holding the machete high, Anna imitates a war cry much like the way the creatures were doing. They look at her and leave her, jumping off into the trees, probably as a sign of respect for her having killed their most fearsome warrior. Anna stumbles through the woods back to the beach, buries the key in the sand and tries to make her way on a small inflatable dingy as the movie ends. While the movie is a rip of Predators, the acting quality and story telling pales in comparison and it is definitely a B grade film. Here’s the good part – the prosthetics are actually decent. The script calls for several creatures, and they have differentiation between them, including the leader. There’s good facial movement (a feat with full face makeups) and the actors seem very agile in the suits. They actually leap from trees and stuff, no CGI, which was damn impressive in full suits. 6 outta 10!