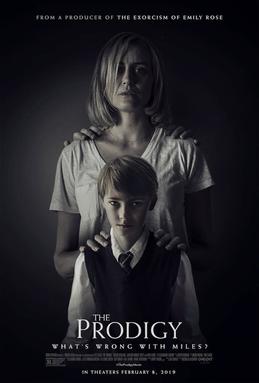 The Prodigy is a 2019 American-Canadian horror film directed by Nicholas McCarthy, and starring Taylor Schilling, Peter Mooney, Colm Feore and Jackson Robert Scott. The plot centers around a child whose disturbing behavior signals that an evil, possibly supernatural being has taken control of him, forcing his parents to investigate whether sinister forces are involved.

The film is about this young boy who is more than what he seems. In rural Ohio sserial killer Edward Scarka, who abducts and later kills women, is shot dead by the police after one of his victims escapes and alerts the authorities. Before he dies he recites a chant or spell in a foreign language. Several states away in Pennsylvania married couple Sarah and John give birth to their son, Miles. Pretty soon they are made aware that their son is a prodigy showing extreme wisdom and intelligence from a young age, and begins speaking fluently before he is even a toddler.

However things aren’t all good as Miles starts behaving in disturbing fashions attacking a classmate with a wrench, talking gibberish in his sleep and scares his babysitter – and later claims no memory of it.  Sarah brings Miles to psychiatrist Elaine Strasser, and turns over a tape recording of him talking apparent gibberish in his sleep. Elaine gives the tape to a colleague, Arthur Jacobson, an expert on rebirth and reincarnation. Arthur reveals that the gibberish Miles spoke is in fact Hungarian, and that the words translate to “I’ll cut your eyes out and watch you die, whore.” Sarah is unwilling to believe Arthur’s assertion that an unsettled spirit wants control of the boy’s body. At home, the family’s dog goes missing, and John becomes infuriated when he finds that Miles has been recording the couple’s bedroom with a baby monitor. John leaves to stay with his brother, leaving Sarah alone with Miles. Sarah later finds a swarm of flies in the house and discovers the family’s dismembered dog in the basement. Miles apologizes, explaining that someone is invading his dreams every night, and that he has to “make room.”

Sarah brings Miles to Arthur who hypnotizes him and the individual explains that his parents were Hungarian immigrants. The session goes awry when Miles threatens to accuse Arthur of drugging and molesting him, which prompts Arthur to end the session. Afterward, Arthur finds “Scarka” carved into his leather couch from the boy’s fingernails. He calls Sarah and explains that he believes Miles’s body is being possessed by Edward Scarka, attempting to return to continue his killing spree. Sarah researches Scarka and finds out that the killer died just minutes before Miles was born and that his parents were Hungarian immigrants. John and Sarah decide to have Miles incarcerated, but Miles stabs John en route to the facility, causing him to crash; John goes into a coma as a result of the accident. In Miles’s room, Sarah uncovers a cache of newspaper clippings about Edward’s crimes, as well as a book by Margaret St. James, Edward’s final victim, who escaped and led authorities to him.

Sarah realizes that Edward, through Miles,needs to get to Margaret and decides to kill Margaret herself, ending Edward’s need for Miles’s body. She drugs Miles with sleeping pills and the two drive to Margaret’s rural farmhouse. However once she confronts the women she is unable to kill her. Miles though comes barging in and attacks Margaret with a butcher knife, stabbing and disemboweling her. Sarah chases Miles outside to console him, believing Edward has left his body now that his final deed is complete. However, he reveals that Edward has taken full control, and Miles’s soul has already been vanquished. Horrified, Sarah attempts to shoot him but before she can, a farmer shoots her with a rifle, killing her. Some time later, Miles is taken to live in a temporary foster home until John is discharged from the hospital. In his new bedroom, Miles stares into a mirror, which reflects back the image of Edward.

The film was released in the United States on February 8, 2019, by Orion Pictures. It has grossed over $19 million and received mixed reviews from critics, who praised the performances but criticized the story. It’s a unique storyline of reincarnation and a killer possessing a boy to kill the woman who got away. I like the acting but the movie isn’t that good overall. I give it a 6.5 outta 10!