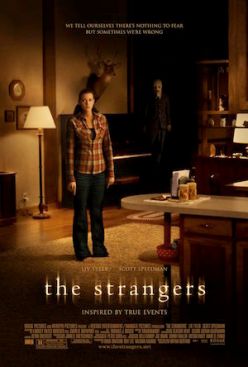 The Strangers is a 2008 American slasher film written and directed by Bryan Bertino. Kristen (Liv Tyler) and James (Scott Speedman) are expecting a relaxing weekend at a family vacation home, but their stay turns out to be anything but peaceful as three masked torturers leave Kristen and James struggling for survival. Writer-director Bertino was inspired by real-life events: the Manson family Tate murders, a multiple homicide; the Keddie Cabin Murders, that occurred in California in 1981; and a series of break-ins that occurred in his own neighborhood as a child. Made on a budget of $9 million, the film was shot on location in rural South Carolina in the fall of 2006.

This is the kind of movie that makes me ask the question; why do Americans build or buy houses that are either in the woods or in a secluded place? Nothing good comes out of it people! This is a home invasion film that happens to a couple, James and Kristen, who have come to James’s secluded family summer home after attending a friend’s wedding. They are both sad and irritable as James had planned a romantic night for them and proposed to Kristen but she apparently said no and they are breaking up. A strange girl knocks at their door at 4 am asking for Tamara and she leaves when they say she has the wrong house.

James goes to buy cigarettes and Kristen hears banging on the door that scares her. She knows someone is in the house when her charges goes missing and a smoke detector is removed and is startled by a man in a mask outside the window as well as the Dollface, the girl from earlier, trying to get in. She slams the door shut and calls James. James comes home and is spooked by Dollface and he and Kristen try to leave in his car but the strangers smash their truck into their car. Back inside the house, Kristen and James find a shotgun and wait for the intruders in a bedroom. Their friend Mike comes over as James had called him to come pick him up and James mistakes him for an intruder and shoots him dead by accident.

While trying to get outside and find help both of them are caught and attacked and they wake up to find themselves tied to chairs. Kristen asks, “Why are you doing this?”, Dollface replies, “Because you were home.” The strangers then unmask themselves to the couple offscreen, and take turns stabbing the couple before leaving the home. Two boys distributing religious pamphlets find the door open and Kristen, who isn’t dead, screams for help as the movie ends.

Disturbing for sure, scary in a non-supernatural way this film set over a night is effective in parts. I give it a 7 outta 10 for the scares.