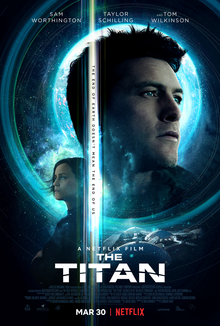 The Titan is a science fiction thriller film directed by Lennart Ruff. The screenplay was written by Max Hurwitz, with the story by Arash Amel. The film stars Sam Worthington, Taylor Schilling and Tom Wilkinson and is an international co-production between the United Kingdom, the United States, Germany and Spain.

In the year 2048 the earth’s resources are dwindling as overpopulation and violent conflicts rack the planet. scientists are looking to Saturn’s moon Titan as a new home for humanity, spearheaded by Professor Martin. Rick Janssen, a war pilot who survived for 3 days in the Syrian desert without food or water, is chosen to be a part of an experiment that forces humans to adapt to the surface of Titan, due to his past ability to survive in extreme conditions. Rick moves to a military base, sharing a lovely modern home with his wife, and medical doctor, Abigail and their young son Lucas. A few other soldiers and a scientist who have shown similar physical and metal strength are handpicked to be experimented upon.

The experiment, in the beginning, seems successful. Rick becomes able to swim at incredible speeds and stay underwater for 40 minutes at a time. However the members have their veins get darker at times, which turns out that their blood is also becoming darker. Rick’s training becomes increasingly intense as he and the other humans are subjected to colder and more Titan-like environments. Following a swimming drill, Rick finds that some of his hair is falling out, and one of the members begins convulsing in the bathrooms and dies. The following night, while the experiment subjects are having a meeting, Abigail notices darker veins appearing on them. Zane, one of the subjects, has sudden mental breakdown and hits his female partner. Abigail, now questioning the safety of the experiment, takes swabs of the blood in Rick’s vomit, and notices several cameras hidden in their home.

Rick takes a break and sits at the bottom of their swimming pool, where large amounts of his skin shed off. Abigail notices Rick is shedding skin and hair. Rick becomes paler and undergoes eye surgery to accommodate for the low light on Titan. He returns home only to begin bleeding from his eyes, and is rushed back into surgery. Abigail confronts Professor Martin about Rick’s changes, but does not learn anything more. She returns home to find an emergency situation with Zane. Zane suffers another mental breakdown and throws his wife through a window, killing her instantly. He is then shot down and killed by the military. While he is in surgery, Abigail uses his keycard and goes in the main lab where she finds out that  they are having their DNA infused with animal DNA, and are taking steps towards becoming the next human species, called homo titaniens.

She confronts Professor Martin at her home with Rick, to find that he does not actually know what Rick will actually become. Rick regains his sight and willingly enters a major surgery to adapt to his new senses and become fully ready for Titan. Rick and Tally (another member of the experiment) are the only survivors of the operation, completing their training and finishing their transformations into homo titaniens. Abigail watches with horror and disbelief at her new husband. Rick is unable to communicate with Abigail now after the transformation. The evolution causes him to communicate in a low frequency that is unable to be detected by normal human ears. Rick is sent home for two days until their launch to Titan is ready. That night he accidentally hits Abigail while putting on his jacket due to his enhanced abilities.

Tally kills her husband and comes to meet Rick when they are surrounded by soliders. Tally attacks and kills a couple and is soon shot to death while Rick seems to get the better of his to be captors but stops when Abigail confronts him. He runs off, followed by her and they kiss in the woods but are captured. Abigail is forced to give him a chemical solution that would act similar to a medical lobotomy, erasing all of his memories with his family. Abigail secretly switches the solution out with a harmless saline solution, tricking the military into believing that he is safe. He kills the soldiers hunting him and is hurt and catches up with his wife, son and Dr. Freya, an assistant to Professor Martin who betrayed him. They eventually give themselves up when Martin is sidelined by the colonel in charge.

The scene cuts to Rick, Dr. Freya, and Abigail along with her son being transported to the Titan II facility, where Abigail becomes the head researcher, and Rick is sent to Titan. The film ends with Abigail staring up into the night sky with her son while Rick explores Titan alone, walking naked on the harsh yet still beautiful landscape and flies as he has had wings having developed.

While it is a science fiction film, it focuses more on the change Rick goes through and how it affects his family life. I was actually waiting for a team to do an exploration and hoping for some kinda of franchise to form after a team of genetically mutated humans explorer Titan and setup a base etc. It’s not a bad film but it never really excites you or offers anything you. 7 outta 10!