Hola Trekkies. We have another unboxing look at yet another Star Trek Starships from the official collection from Eaglemoss. This time it’s from Star Trek Enterprise and it’s a ship from an alien species that humans have a love em-hate em relationship that lasts for most of the series. Yes, it’s the Andorian Battlecruiser. 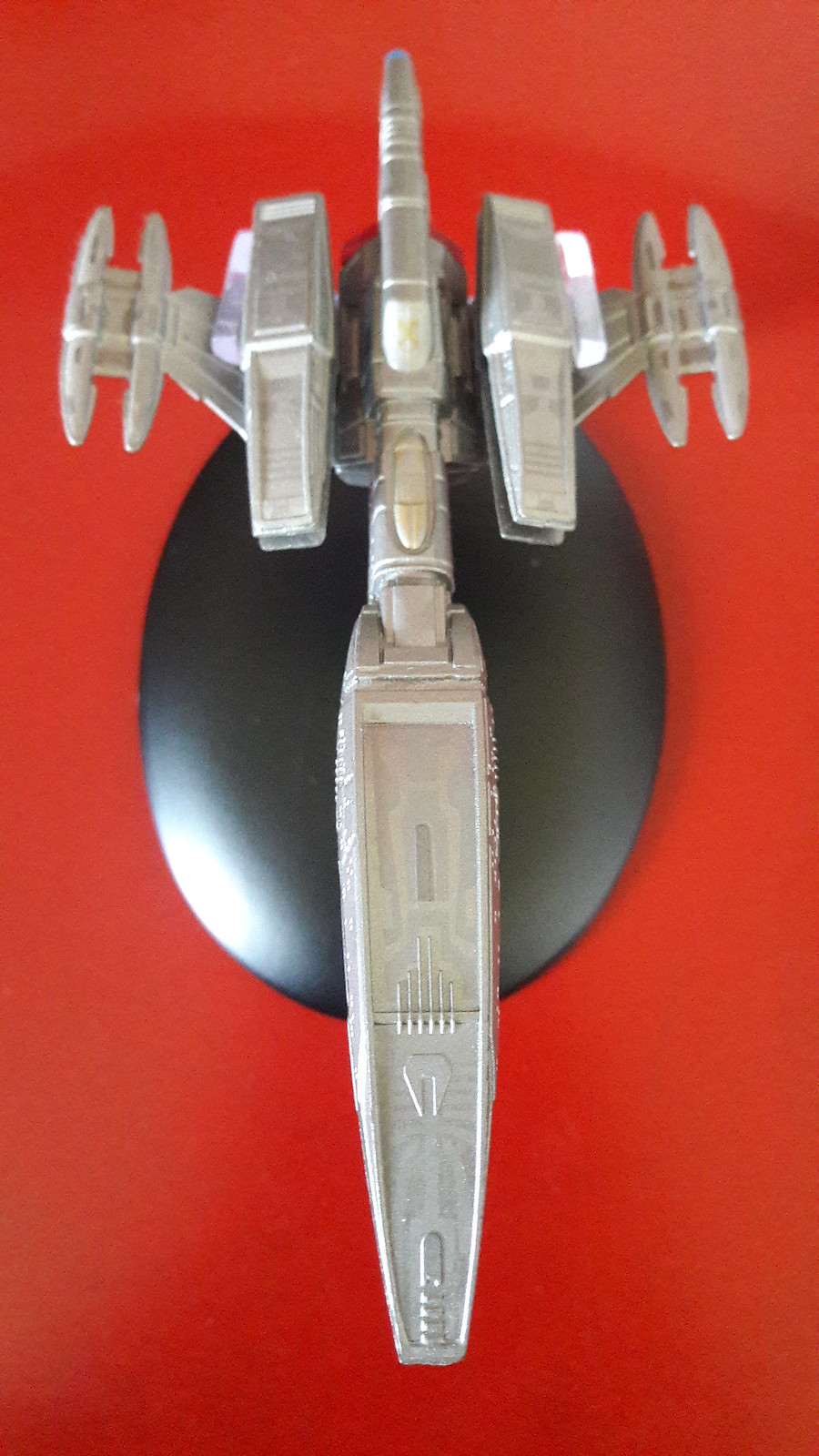 The Andorian battle cruiser was a type of warship in service with the Andorian Imperial Guard during the mid-22nd century. The first ship of this class, the Kumari, was commanded by Commander Thy’lek Shran from 2142 to 2154. Since their launch in the 2140s, several Andorian warships of this type had been reported missing. When Enterprise NX-01 was attacked by a Romulan drone ship disguised as an Andorian battle cruiser, Shran suggested that the Tellarites may have been responsible, using one of these missing ships after enhancing its systems. In 2154, several Andorian battle cruisers were incorporated into an Andorian-Tellarite-Vulcan fleet which consisted of some 128 ships, formed in response to a Romulan marauder that threatened the entire region. In the mirror universe, the Andorian rebels utilized this class of vessel to engage the Terran fleet in 2155. At least two of these vessels were among the rebel ships attacking the ISS Avenger. 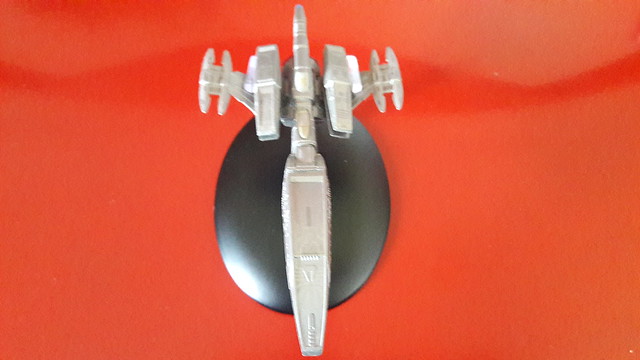 The Andorian battle cruiser was considerably more rugged than the designs utilized by contemporary United Earth Starfleet vessels. Like all Andorian combat vessels, the Andorian battle cruiser was constructed using a “significant quantity” of duranium alloy. Despite the vessel’s fairly large size, it was crewed by a complement of only eighty-six. In comparison, Starfleet’s smaller NX-class had a standard compliment of eighty-three. The outboard plan of the Andorian battle cruiser’s design consisted of a central “spine” that contained a vertically bifurcated forward hull containing several decks. The central “spine” gradually narrowed toward the aft section of the ship where it connected to two vertically stacked warp nacelles. Located midway down the “spine” were a pair of forward-swept wings which contained the impulse engines and defensive systems. 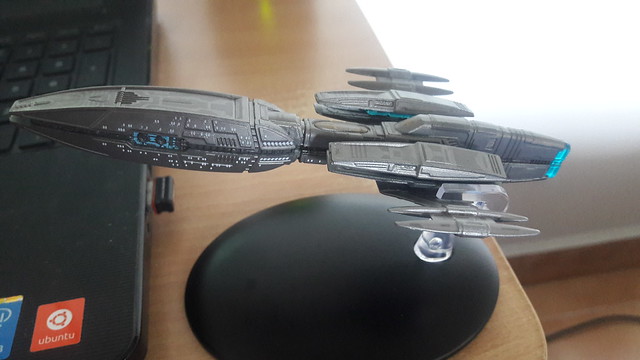 The defensive systems utilized by the Andorian battle cruiser included a formidable array of particle cannons composed of multiple forward cannon emplacements, port and starboard wing emitters, as well as dorsal and ventral emitters capable of firing in 180 degree arcs. The Andorian battle cruiser enjoyed an advantage over other less advanced vessels of this era due to its utilization of deflector shield technology. Nevertheless, this class was somewhat susceptible to attacks directed towards its shield generator. The shield generator itself was located distantly from the vessel’s power grid, leaving it vulnerable to damage. 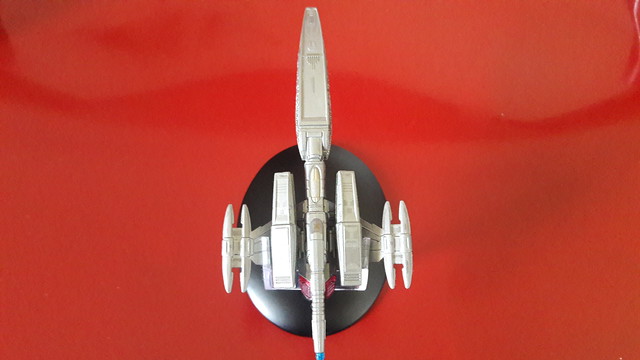 During the 2150s, Andorian technology was considered to be more advanced than analogous Tellarite technology. One Tellarite cruiser was said to not be able to “stand a chance” against two Andorian warships. The Andorian battle cruiser had a level of firepower comparable to the Xindi-Reptilian warship and the Vulcan D’kyr-type combat cruiser. In the mirror universe, this class proved significantly inferior to a mid-23rd century Federation Constitution-class starship. This was clearly illustrated when the USS Defiant, defending the Terran warship ISS Avenger from rebel attack, engaged and destroyed one Andorian battle cruiser within seconds and inflicted heavy damage to a second before allowing it to escape. 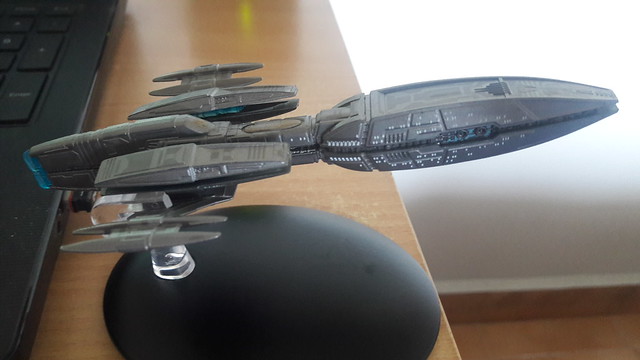 The Andorian battle cruiser housed at least one shuttle. They also carried multiple escape pods. The bridge layout consisted of an inverted “half-moon”-shaped viewscreen located on the forward bulkhead, directly in front of the ship’s side-by-side helm and navigation console. In the center of the bridge was the captain’s chair, with two large convex dishes on either side of the chair. A semi-circle of four station consoles, each with its own stool, surrounded the captain’s chair, one each to port and starboard, and two near the aft. All four consoles were each attached to a support column which braced the bridge’s vaulted ceiling.

So that’s the info and pics of my Andorian Battlecruiser. Hope you like them and also please find below the unboxing video; the model came with the Kremin Temporal Warship.