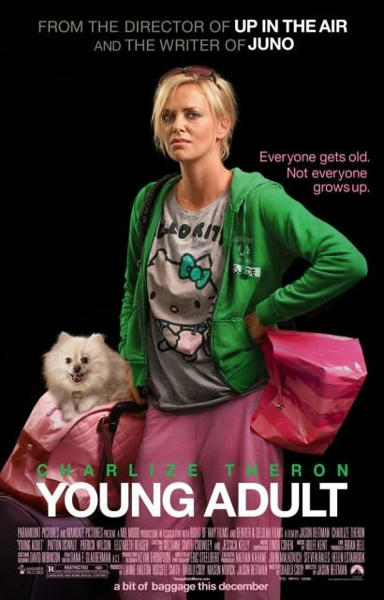 From the writer & director of Juno comes Young Adult. Director Jason Reitman joins his buddy Diablo Cody roped in Charlize Theron to play out the main character, joined by Patton Oswald, Patrick Wilson & Elizabeth Reaser. Released in mid December the movie might have only made $20 million at the box office but made many lists for one of the best movies of 2011. I would even go to say that this movie is not for everyone while Juno was a much more entertaining movie, this one probably had better acting.

Mavis Gary is a divorced ghost writer for a one-time successful young adult series of novels living in Minneapolis. While on deadline with her editor to finish the last book of the soon-to-be-cancelled series, the 37 year old gets a mail from her ex, high school sweetheart Buddy Slade, announcing the birth of his baby girl. Going through depression, she takes this as a sign that she was meant to be with him and packs her clothes & dog into her car and sets off for her hometown of Mercury, Minnesota. On the way she keeps playing and singing a song “The Concept” by Teenage Fanclub on an old mixtape Buddy gave her in high school. I love the way the title scenes show the inner parts of an old cassette tape while being played.

Once she checks into a motel, she goes to a bar and calls Buddy to meet her for drinks. He asks to meet the next day instead, so Mavis goes in alone and meets a former classmate Matt. Matt was crippled in a bit of high school cruelty when a group of students beat him thinking him to be gay, though he was not. Matt tells her that it wasn’t right to try and rekindle sparks with an old flame as he is  married & with a small child. Mavis meets Buddy the next evening and they reminisce in a sports bars. Matt also just happens to work there. Buddy invites Mavis to attend a concert by Beth, his wife’s, all mom band the next evening. Before that Mavis meets up with Matt for another night of drinking and bonds with him. The next evening she dressed up and meets Buddy at the bar where the band is playing, and sees that the other ladies all resent the former “”psychotic prom queen bitch”. Mavis flirts with Buddy but is upset when the band dedicates the song ‘The Concept’ from Beth to Buddy.

After the concert Mavis offers to drive Buddy home while Beth celebrates with her band and at his home they briefly kiss until interrupted by the babysitter opening the door. The next day, after Mavis has an uncomfortable meeting with her parents at their house for lunch, Buddy invites her to his house for the baby’s naming ceremony over the weekend. Mavis spends more time with Matt drinking & bickering. At the party she professed her love for Buddy but he rebuffs her advances and she decides to leave but collides with Beth, who accidentally spills wine on Mavis’ dress. In a profanity-ridden rant she reveals that she became pregnant with Buddy’s baby years ago, but had a miscarriage after three months. When she asks Buddy why he invited her, he admits that it was Beth who wanted her there as she felt sorry for her. Humiliated, Mavis leaves the party and visits Matt, where she breaks down in tears and initiates sex with him. In the morning she has coffee with Matt’s sister Sandra.

Mavis talks about needing to change herself, but Sandra says Mavis is better than the rest of Mercury and should not change. Mavis decides to return to Minneapolis. Sandra asks to go with her, but Mavis says, “You’re good here, Sandra.” She leaves alone. On her way back to the big city, she finished the final chapter of the book and as the movie winds down Mavis looks at her beat up in the parking lot, the result of her drinking & driving.

The movie is about someone who is clinging on to her glory days of her high school days as her life starts crumbling. She then believes that her ex is now trapped in a marital boredom but yet it is she who is in a rut. Her vanity does not let her accept that so she tries to break up his marriage & free him from what she perceives as his prison. There is a sense of longing & nostalgia about this movie. Watch it and let the acting speak for itself. Not for everyone as it doesn’t really a fast paced movie but it’s totally entertaining for me. 7.5 out of 10!

One thought on “Young Adult”